By Seo Jee-yeon
Published : May 7, 2013 - 20:17       Updated : May 7, 2013 - 20:17
South Korean conglomerates are facing a crisis of stagnant growth, squeezed by falling domestic demand and a prolonged global economic downturn. The chaebol are actively searching out new business beyond their core to survive.

According to FnGuide, a local financial information provider, about 63 percent of 41 companies listed on the main stock bourse posted an on-year drop in their first-quarter operating profit.

“Aside from those in such areas as electric, electronics and pharmaceuticals, conglomerates did not perform well in the first quarter of this year. Pressed by a worsening internal and external business environment, they have no choice but to tap new business areas beyond their core to survive,” an official from the Woori Investment & Securities said. 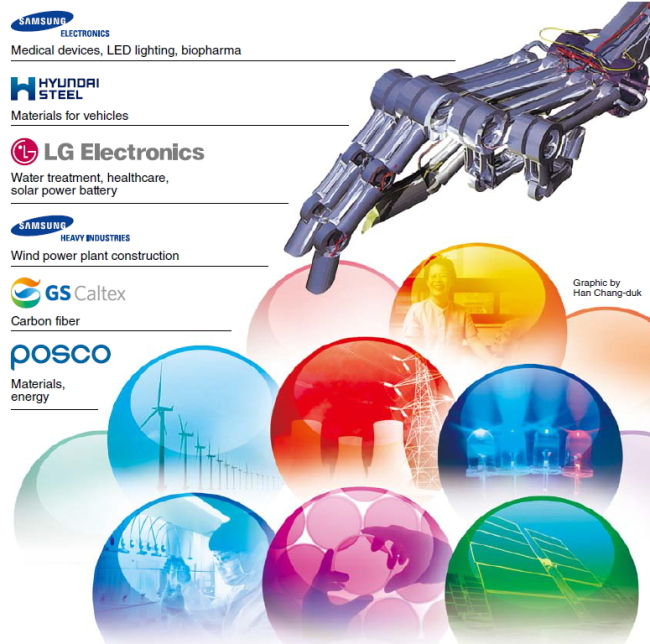 On April 30, Hyundai Motor Group, the nation’s second-biggest conglomerate after Samsung, announced it would enter the steel materials business, unveiling an investment plan worth 1.12 trillion won ($1 billion) to start the business of materials for vehicles. Hyundai Steel, under the wing of the auto giant, will lead the automotive group’s new business.

The investment plan came at a time when profitability of the group’s two auto brands ― Hyundai and Kia ― is falling behind the global competition because of the cheaper yen. Under the auto group’s latest investment plan, Hyundai Steel will build two plants which will produce specialty steel and high-quality iron, two key materials used in vehicle engines and transmission.

Market watchers said the entry of Hyundai Motor Group into the steel materials business is part of its efforts to secure a new income source and to raise profitability of its core businesses.

“The materials business is the most profitable area in an industrial ecosystem consisting of materials, parts and end products. South Korean manufacturing giants have secured global competitiveness in parts and end products, while they are less competitive in the materials area compared with other global competitors in the U.S. or EU,” said Nam Ki-man from the Ministry of Trade, Industry and Energy.

Top management of POSCO, the nation’s top steelmaker, also declared it would accelerate investments in materials and energy businesses to diversify its business portfolio beyond the steel business in 2012.

Despite record-breaking operating profit in the first quarter, Samsung Electronics, the nation’s biggest conglomerate, is no exception in the race for developing new income sources beyond its core.

Among those five new businesses, the electronics giant is nurturing the medical device business most proactively through a series of inbound and outbound merger and acquisition deals.

“Companies are likely to compete with rivals from different industries in the near future. For instance, Samsung Electronics could emerge as one of strongest competitors for existing medical device makers. In the water treatment sector, construction companies could compete with LG Electronics,” he said.