By Korea Herald
Published : Apr 9, 2013 - 19:39       Updated : Apr 9, 2013 - 19:39
HONG KONG ― Hong Kong, with its gourmandise culture and international population, is a fierce battlefield where most of the world’s leading premium beer brands compete for market dominance. To the surprise of many, the undisputable champion there is a Korean-manufactured brand.

Blue Girl, a premium pilsner lager manufactured by Korea’s Oriental Brewery and marketed by Hong Kong’s Jebsen Group, has kept its lead in the local market for six consecutive years since 2007.

As of September 2012, its market share was 22.4 percent, far above the 10.4 percent of SKOL, the Brazilian runner-up brand. Considering its relatively expensive price, the brand’s share in terms of revenue is even higher. 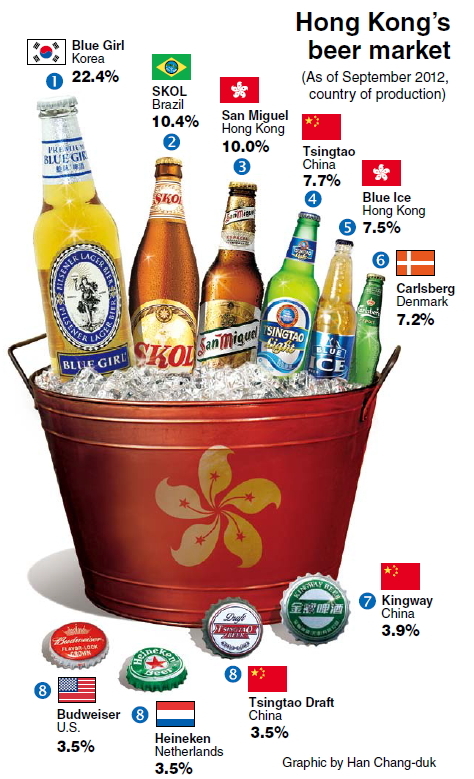 Last week, Jebsen and OB held a press conference in Hong Kong celebrating the 25th anniversary of their partnership.

The strong and bitter taste, together with the relatively high alcohol level of 5 percent per volume, was the key secret to the brand’s success, according to Michael Glover, managing director of Jebsen Beverage Co.

“Because of the humid weather and the strongly seasoned food, Hong Kong consumers tend to prefer beers which are lowly carbonated and densely brewed,” he explained.

Another factor was the Original Development Manufacturing system, which allows the manufacturer a wider range of discretion, the official added.

“Jebsen’s strategy was to maintain Blue Girl’s original European taste, while moderating the details to meet the local market demands, which was a rather complicated task,” he said.

“OB Company, however, responded to our demands with ease, displaying its capacity as original development manufacturer.”

“We acquired the premium German beer brand Blue Girl back in 1906, in an aim to appeal to the high-class consumer group,” said Glover.

Though the initial market response was positive, the logistical cost of importing beer all the way from Germany acted as an obstacle, he added.

“This is why I selected OB as the new manufacturer in 1988,” Glover said.

“Not only is the company located close to Hong Kong and to other Chinese territories, but it was also highly qualified in brewery and packaging skills.”

The companies have ever since maintained a close partnership, which remained steadfast throughout various critical situations such as Korea’s financial crisis in 1998 and Hong Kong’s SARS breakout in 2003.

Blue Girl is also a significant factor for OB, which has been seeking to expand its overseas market in recent years.

Last year, the Korean beer maker exported 177.8 million boxes of beer, among which over 23 percent was Blue Girl, according to officials.

“The fact that Blue Girl is manufactured in Korea is a competitive factor, especially as other foreign brands such as Carlsberg and Heineken are mostly made in China,” said Charles Park, the executive director of OB.

“This is due to Korea’s credibility as a high-quality manufacturer, as well as the effect of the Korean Wave in the great Chinese region.”

“Our local brands such as OB Golden Lager have also been showing visible growth in the Australian market recently,” he said.

“These examples tell us that it is now time to diversify our product range and to expand into the world beer market.”