Two years after the Fukushima disaster, nuclear power bounces back with resumption of plant construction

By Seo Jee-yeon
Published : Apr 4, 2013 - 19:49       Updated : Apr 4, 2013 - 19:49
PARIS ― Having lost much of its appeal after 2011’s Fukushima nuclear disaster, nuclear energy is coming back into favor, slowly but steadily. Emerging economies are resuming plant construction, particularly in Asia, where power demand is exploding in line with rapid economic growth.

China led the trend this year, opening the first nuclear power plant since the Fukushima crisis in Dalian, Liaoning province. Industry watchers said the Chinese government will step up construction of nuclear plants starting this year. In October China announced that it would increase the ratio of nuclear energy in its total electricity generation to 4 percent by 2020, up from the current 1.8 percent. 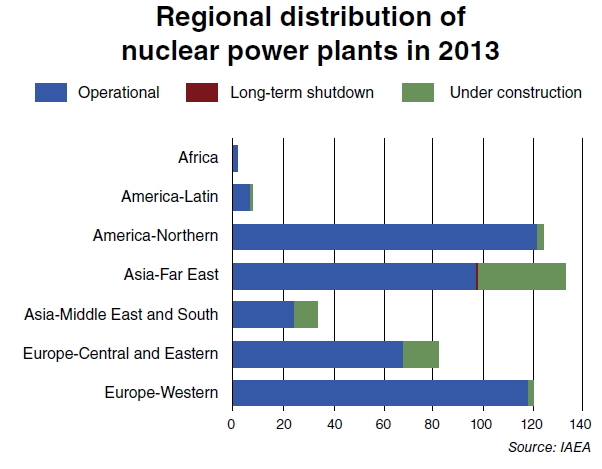 India, Asia’s second-largest economic powerhouse after China, is constructing seven reactors for power generation. The Indian government seeks to generate 25 percent of its electricity from nuclear power by 2050, up from the current 3 percent.

Meanwhile, the newly launched South Korean government has signaled that it will continue its nuclear energy program, while strengthening safety standards, according to Korea Hydro & Nuclear Power.

Globally, the International Atomic Energy Agency has predicted that nuclear power capacity will grow by at least 26 percent over the next 16 years based on rising energy demand in emerging markets.

The return of nuclear energy owes to its appealing advantages for future energy security.

“Nuclear energy is still the cheapest energy source to generate (outside the cost of plant construction). And it is relatively carbon free,” Harles Hufnagel, a senior executive vice president of Areva, a French state-controlled nuclear reactor maker, told The Korea Herald.

“In fact, after the Fukushima accident, only two countries decided to phase out their nuclear power program ― Japan and Germany. However, Japan already signaled to resume operations of nuclear plants stopped. Now Germany stays as one single exception,” he added.

Data shows that the revival of nuclear energy is not limited to emerging markets. Among developed nations to have nuclear plants, the U.S. last year approved the construction of four nuclear reactors over the next 34 years. Finland launched a bidding process early this year to build a fourth reactor at Olkiluoto Nuclear Power Plant in west Finland.

Besides cost advantages, nuclear energy can act as a bridge in the transition to renewable energy for developed countries that are sensitive to environmental issues, Hufnagel said.

According to him, European countries have to reshape their energy matrices as the EU decided to increase dependence on renewables by 20 percent by 2020. Nuclear energy can be part of the transition to renewables, as no EU member country wants to increase the use of environmentally unfriendly energy sources like coal and gas when generating additional power.

“None of these key drives were affected by the Fukushima nuclear accident except the public acceptance of nuclear energy. This is why I do feel confident there is room for nuclear energy in the global energy mix in the long term,” he added.