By Korea Herald
Published : Mar 10, 2013 - 21:13       Updated : Mar 10, 2013 - 21:13
There’s good news for people who struggle to spell Korean names correctly in English: The Ministry of Culture, Sports and Tourism on Friday decided to standardize the Romanization of Korean names into “family name + given name” instead of the widely used “given name + family name” as written in Western countries.

In an attempt to respect the Korean tradition of placing more value on family names, the government said the new guideline would affect all Korean names on government documents, websites and name cards of public officials. 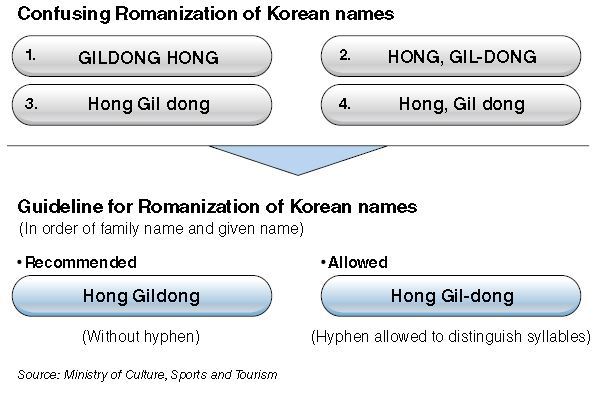 “The Romanization was intended to communicate with foreigners and the new guideline will show off our identity, leading users to respect Korean traditions and culture of language,” the ministry said in a press release.

For example, the name Hong Gil-dong was previously written in various forms, from GILDONG HONG to Hong, Gil dong or HONG GILDONG. Following the new rules, it will now be written Hong Gildong or Hong Gil-dong.

The guideline was based on rules from international organizations and media outlets that use Romanized Korean names. The UNESCO acknowledges that the family name is the first element in East Asian culture and it should not be inverted. AP, the New York Times, BBC, Le Monde and other media also put the family name first.

The name guideline is the latest Romanization policy by the Culture Ministry. Its affiliate, the Cultural Heritage Administration, earlier this year adopted a guideline for the Romanization of cultural assets, which is to Romanize the whole Korean name then add the English translation after, despite the inevitable overlapping.