Range of goods exported by Korea, Japan more similar than ever

The duplication rate of Korea and Japan’s top 50 export items hit a record high of 52 percent in 2012, LG Economic Research Institute, or LGERI, said based on trade data from the Korea International Trade Association. 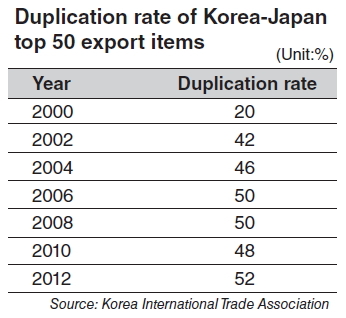 “The degree of overlapping deepens in the top 10 of export items. About 90 percent of the top 10 export items of the world’s ninth-largest exporting country overlapped with those of Japan,” the LGERI report said. The top nine made-in-Korea products in competition overseas with Japanese goods include electric and electronic goods, machinery products, cars, ships, plastic goods, steel, precision machinery and organic chemistry goods.

Industry watchers forecast Korea could take a big hit from the continued rise of the won’s value, in particular against the yen due to the two countries’ similar industrial strengths.

“Contrasting with cars, the strong won is expected to deal a smaller blow than expected to such industries as the semiconductor and electronics industries as Korean brands in these areas have differentiated themselves from Japanese rivals,” Kang said.

LGERI, however, warned of the long-term trend of a strong won. The won has soared 27 percent against yen since the beginning of 2012 till the second week of January this year. The decline of the yen has accelerated since November last year as the Bank of Japan sought more aggressive monetary easing policies to boost its sluggish economy. The won’s value also rose 7.4 percent against the dollar in the same period.