Hyundai Motor, which was established in 1967 under the leadership of late Hyundai founder Chung Ju-yung and his brother Se-yung, released the Cortina compact in coordination with Ford Motor in 1968.

The company made its successful debut as an independent brand by unveiling the Pony, a four-door small sedan, in 1975.

The Pony and Pony II were exported to countries such as Ecuador, Colombia, Argentina, Egypt, Belgium, the Netherlands, Greece, the United Kingdom and Canada.

After tapping the United States with the Excel compact in 1986, the company started rolling out models with its own technology in 1988, beginning with the Sonata, a mid-segment sedan. 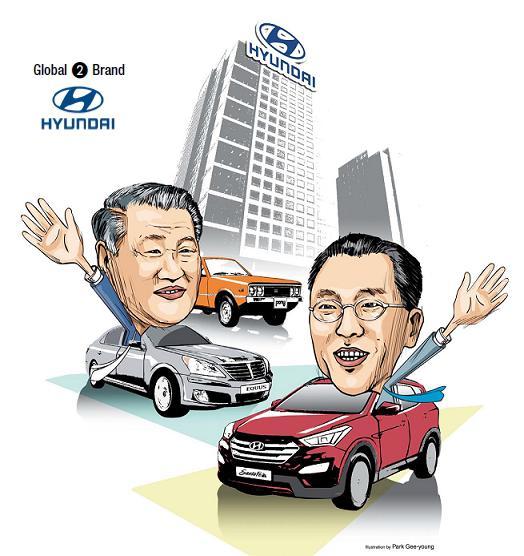 Hyundai Motor successfully weathered the 1997 Asian foreign exchange crisis and expanded its business by taking over Kia Motors in 1998. It grew as an automotive group to control several subsidiaries, including auto parts maker Hyundai Mobis.

Over the past 15 years, the automotive group grappled to catch up with global players under the management of group chairman Chung Mong-koo and his son Eui-sun.

It has actively invested in manufacturing plants in countries such as the United States, China, India, Russia, Turkey, Brazil and the Czech Republic as well as research and development centers in Europe, Asia, North America and the Pacific Rim.

A representative example is its U.S. assembly line in Montgomery, Alabama, which was established in 2004 at a cost of $1.7 billion. It marked the company’s second attempt at rolling out cars in North America since Hyundai Auto Canada Inc.’s plant in Quebec closed in 1993.

Affiliate Kia Motors is operating assembly lines in countries including the U.S., China and Slovakia.

Under chairman Chung Mong-koo’s initiative toward global management, it took about a decade for the automotive group to set up assembly lines in Brazil, Russia, India and China as well as the U.S. and Europe.

While Hyundai and Kia have secured the combined annual production capacity of 3.69 million units in the overseas market, their capacity is projected to expand to 4.09 million units over the next two years.

Hyundai seeks to increase its Turkish plant’s capacity by 100,000 units and by 2013 and Kia is scheduled to complete a third plant in China by 2014.

The automotive group has pushed for “glocalization,” a term referring to strategies for garnering locals’ sincere support in areas where plants are located. It actively recruited locals as well as offering them many training opportunities for automobile industry-related skills.

Thanks to its contributions to vitalization in the regional economies, Hyundai and Kia enjoy business-friendly environments provided by municipal governments.

The two firms saw their production of vehicles in the overseas market outpace their domestic performance for the first time last year.

Its sales growth of 10.9 percent in the overseas market offset the 2.3 percent drop at home.

Hyundai said its sales from factories in China and the Czech Republic grew about 15 percent and 20 percent, respectively.

Overseas shipments led the increase, with about 2.23 million Kia vehicles sold, up 9.4 percent on year, while domestic sales dipped 2.2 percent to 482,060 units.

In China, the world’s largest automobile market, Hyundai Motor Group is speeding up its mid-term project to overtake General Motors in vehicle sales in China by expanding its manufacturing capacity.

Though Volkswagen maintains the No. 1 position in the Chinese market, the sales gap between GM and Hyundai Motor-Kia Motors has narrowed.

The group is also closely competing with Toyota Motor to become the No. 1 in automobile sales in Africa, posting a monthly sales growth rate of about 50 percent on average.

Hyundai holds the No. 2 position, with a share of about 12 percent, in the fast-growing African market while Toyota captured 14.7 percent of the market.

Thanks to strong marketing over the past few years, Hyundai has surpassed Toyota in five major countries ― Algeria, Angola, Morocco, Egypt and the Republic of South Africa.

As sales in the five nations account for more than 80 percent of all automobile sales on the continent, the competition between the two Asian automakers is likely to get fiercer.

Meanwhile, Hyundai and Kia are together the world’s third-biggest carmaker in terms of market capitalization.

According to industry data, the two companies’ combined market capitalization has reached about 70 trillion won ($65 billion) ― Hyundai with about 47 trillion won and Kia with 23 trillion won.

Their value on the global stock market could be regarded as No. 3 out of 12 major automakers.