By Korea Herald
Published : Jan 9, 2013 - 20:52       Updated : Jan 9, 2013 - 21:00
President-elect Park Geun-hye’s election pledge to shorten compulsory military service by three months to 18 months has raised concern that it could result in a troop shortage and weaken the country’s combat capabilities.

Some experts argue that the plan could cause a wartime operational challenge given that the U.S., in case of peninsular contingencies, is expected to focus on naval and aerial operations due to the vulnerability of ground forces and its political cost.

Seoul’s Defense Ministry forecast that should the plan be implemented from this year, the military would suffer an annual shortage of around 27,000 troops by 2030. The calculation is in line with the ongoing government project to reduce the troop number to 522,000 by 2022 from the current 639,000. 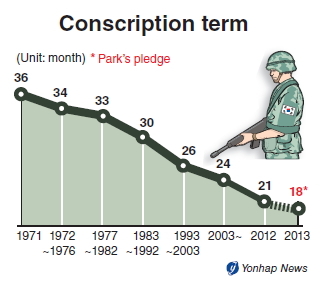 The shortage could worsen in the coming decades given the country’s shrinking and aging population, experts pointed out. The incoming leader plans to address it by hiring non-commissioned officers, but the costs for the employment, and their housing and welfare are expected to top 1 trillion won ($941 million) per year.

“Under Park’s plan, draftees would have to leave when they are trained enough for combat missions and then the military starts training recruits again who will get discharged when they become useful,” a military expert said, declining to be identified.

“The plan appears to have been haphazardly made during the election year without due consideration of troop capacity, the country’s aging population and other military and social factors at work.”

The Defense Ministry is to offer a policy briefing to Park’s transition team later this week, during which it would express its concern over the possible weakening of the troop strength and budgetary issues.

Some critics have called for the cancelation of the plan, calling it “populist.” They cited continuing military threats from North Korea, territorial disputes and volatile security situations in East Asia.

They also argue that the South is behind the North in terms of the troop strength. According to Seoul’s 2012 defense white paper, the North has around 1.19 million troops including 1.02 in the army. The South’s troop number is tallied at 639,000.

The North’s mandatory military service is also known to be up to 10 years.

Park’s plan to shorten the service period comes as South Korea’s core ally the U.S. is reorganizing its military priorities following a decade of war in Iraq and Afghanistan and rebalancing toward the Asia-Pacific.

In recent years, the U.S. has appeared reluctant to involve its ground troops in battle zones, observers said, highlighting it is likely to use naval and aerial assets such as combat drones to strike hostile forces from a distance so as to minimize casualties.

For this, experts stress the need to maintain a strong army, although they do not underestimate the need to enhance naval and aerial power to respond to offshore security challenges.

“In case of a war here, South Korea should have sufficient army personnel given that it should virtually take most of the ground battle missions as well as the post-war stabilization work,” said the security expert.

“For the stabilization campaign, the estimate is that we need at least 300,000 ground troops excluding those for combat missions.“

While some highlight the importance of a large ground force, Nam Chang-hee, a political science professor at Inha University, said that a policy focusing on the military footprint is not politically viable in a democracy.

“America’s reduction of ground troops shows that it does not want to engage in the blood shed of war any more as its democracy does not allow it to happen. This holds true for Korea, now a vibrant democracy different from Korea in the 1960s,” he said.

“Neighboring states such as Japan and China seek to bolster naval and air forces. If we focus too much on the army, it is like returning to the late 19th century, old military structure.”

After all, the budget increase would help address the security challenges facing South Korea.

“South Korea’s defense spending is around 2.7 percent on average of the gross domestic product, which is about the world’s average. Under our security circumstances, it does not appear sufficient,” said Lee Choon-kun, security expert at the Korea Economic Research Institute.

“Israel’s defense spending accounts for more than 6 percent of its GDP and Korea’s is half of it. It is fair to say that the U.S. is to cover the rest.”