The ruling Saenuri Party’s Rep. Park Geun-hye maintained her narrow lead against her progressive rival Moon Jae-in of the Democratic United Party, with supporters of both showing greater loyalty to their candidate, the survey showed.

With the majority believing that Ahn’s withdrawal would help Moon to some extent, they said political reform, economic growth and democratization would remain the key variables in the election.

The survey was conducted by Realmeter on Nov. 26-27 on 1,000 respondents through random digit dialing. The survey has a 95 percent confidence interval of ±3.1 percentage points.

It showed that the dynamics of the election have changed since Ahn’s withdrawal, with 23.4 percent of those in their 30s responding that they could change their support, a rate higher than in any other generation.

Those in their 40s have conventionally been described as the key swing voters in various elections as they remain ideologically progressive but practically conservative. But in the latest survey, only 17.8 percent of those in their 40s responded they might change their mind, down from 25.1 percent from the same survey conducted on Oct. 2. It appeared 40-somethings have mostly made up their mind, with 44.8 percent of them supporting Park and 45.2 percent Moon.

Ahn withdrew from the race last Friday after weeks of tug-of-war with Moon over the selection method of their unified candidacy.

The aftermath of Ahn’s retreat continues with his avid supporters staging rallies for his return and news reports anticipating his move to launch a new party after the election. 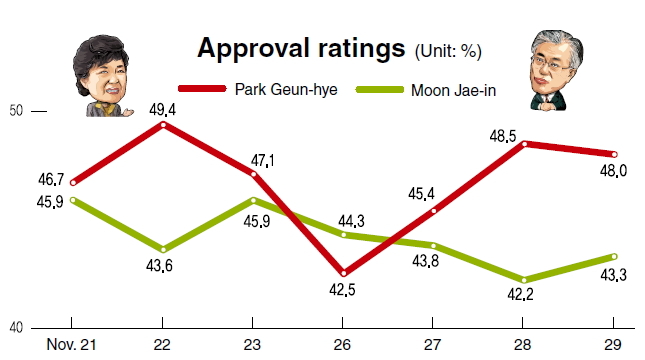 In the meantime, Park and Moon continued their close race, with the former chairwoman garnering 48.0 percent against 43.3 percent of the former presidential chief of staff.

Park was most supported by those living in Gangwon (71.4 percent) and the “PK region” (62.5 percent), while Moon was most liked by those residing in Gwangju and the Jeolla provinces (68.3 percent) and Gyeonggi and Incheon (52.3 percent). PK region refers to Busan and South Gyeongsang Province, another key battleground.

Since the presidential campaign period kicked off this Tuesday, both candidates have been busily traveling through cities holding rallies.

Moon traveled from Busan, where he is less liked (28.7 percent) to the Jeolla provinces that show the highest support, throughout the week. Park, on the other hand, concentrated on regions that show the most support, including the Chungcheong provinces and Busan.

A majority of Ahn’s supporters, meanwhile, threw their support behind Moon, with 54.5 percent, whereas 28.8 percent were in favor of Park. A sizable proportion appeared reluctant to go either way, with 15.4 percent responding that they have not decided who to support.

Supporters of Park and Moon, on the other hand, showed stronger loyalty, with 88.8 percent and 83.2 percent of Park and Moon supporters, respectively, saying they would not change their mind before election day.

With negative campaigning increasing and dissatisfaction with established politics growing upon Ahn’s withdrawal, the voter turnout may be lower than five years ago, the polls also showed.

Only 55.3 percent of the respondents answered they would definitely cast their vote, down 16.9 percentage points from a similar survey conducted five years ago, when 72.2 percent said they were ready to vote. The final voter turnout came at 63.0 percent.

The divided perception was also evident in what the respondents believed were the variables in the remaining campaigning weeks. Those in their 50s and 60s prioritized economic growth over economic democratization, while it was vice-versa for those in their 20s.

Both Park and Moon have channeled economic democratization as key. Park’s plans focused on maintaining the current system were hit hard by opponents for lacking sincerity, while Moon’s economic measures were criticized for lacking plans for growth.

Overall, the respondents pointed to political reform (27.2 percent), a goal originally spearheaded by former candidate Ahn, as the biggest variable in the race. The category was chosen the most among Moon supporters and those who described their ideological standing as “moderate.”

As Ahn has remained out of the public eye since his resignation, Moon has been consistently emphasizing his determination to implement reform in a bid to lure Ahn’s supporters.

Ahn has so far given Moon an indirect and ambiguous reaction, commenting through his spokesperson on Wednesday that he would from now on be making decisions on behalf of his supporters and not for himself.

To the question of who they thought was most likely to win regardless of their preference, 57.6 percent picked Park and 37.7 percent Moon. By party, 44.2 percent supported the Saenuri Party and 37.0 percent the DUP.

Interestingly, one in five Park supporters thought the administration should be changed, indicating dissatisfaction with the incumbent Lee Myung-bak government.