Experts stress U.S. moves part of its global strategy, not only against North Korea

At the annual Security Consultative Meeting in Washington on Wednesday, the allies announced they would launch a “joint working group” later this year to discuss the future command structure, which will apparently replace the current Combined Forces Command. The CFC is to be dissolved following the OPCON transfer. 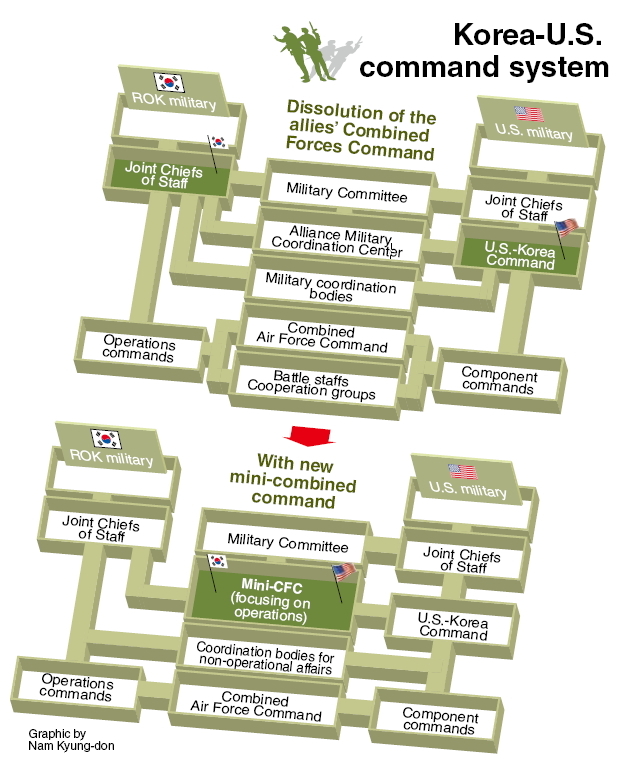 “At a time of still volatile security, the U.S. has major crucial military assets including intelligence-gathering capabilities while Seoul still lacks a full range of operational assets,” a security expert told The Korea Herald on condition of anonymity.

“Under these circumstances, although Seoul will formally maintain the command authority, it will actually be limited, or the U.S. may still continue to exert its military leadership. After all, the U.S. military has never been under control of any foreign commanders in any major wars.”

He predicted that in case of any armed conflict on the Korean Peninsula, the U.S. may seek the most “cost-effective” way by capitalizing on its ally South Korea’s ground forces.

In Libya the U.S. did not send ground troops into the battle zone, but employed unmanned spy aircraft and other intelligence assets while still maintaining its military leadership, the expert pointed out.

“That is the U.S. war strategy ― allocating the military burden to its allies and minimizing its economic burden for a conflict. That could also be applicable for the peninsular situation,” he said.

Whatever the true intentions are, the allies stressed that the discussion over the so-called mini-CFC is crucial as the dissolution of the current command structure could send a wrong signal to the unpredictable, provocative North Korea.

Seoul officials stressed the merits of a systematic operations command structure, which has been consolidated for more than three decades. The CFC was created in 1978 after the allies forged a rudimentary joint military group aimed at fostering systematic combined defense architecture in 1968.

“The study is to discuss what will be the most effective command structure combining the two militaries while reviving the advantages of the current CFC,” a senior Seoul military official told media.

Apart from the allies’ military target ― North Korea, the U.S. may also take into account the need to maintain a stable command structure on the peninsula to better deal with the potential threat from China, considering that the Sino-U.S. rivalry is deepening in the Asia-Pacific, analysts said.

“It is too much expectation if you believe that the U.S. would work out its military strategy to only defend South Korea. The U.S. is projecting a global power with a global strategy. Under that strategy, it is also looking at the peninsular situation,” said Lee Choon-kun, security expert at the Korea Economic Research Institute.

In this regard, observers argue that the allies’ agreement on bolstering their cooperation in the realm of space and cyberspace may also be related to the U.S. strategy to maintain regional preponderance, not just to deter North Korea.

The allies reaffirmed the need to strengthen space-related cooperation during the annual security meeting. Seoul and Washington have signed the “Terms of Reference” for bilateral military space cooperation.

Observers said that this cooperation could be in connection with Washington’s efforts to flesh out its AirSea Battle concept, a strategy intended to counter China’s so-called anti-access/area-denial strategy.

The new military operational concept is to conduct integrated aerial and naval operations across all domains such as air, maritime, space and cyberspace.

Observers say that Seoul can learn much from America’s space technology to enhance its overall military capabilities to deter the North. But they say Seoul needs to employ a more “sophisticated” diplomatic strategy so that its deepened military cooperation with the U.S. would not needlessly undermine ties with China.