The number of Korean women diagnosed with breast cancer quadrupled over the last 15 years due to a more westernized lifestyle and lower birth and breastfeeding rates, health experts said. 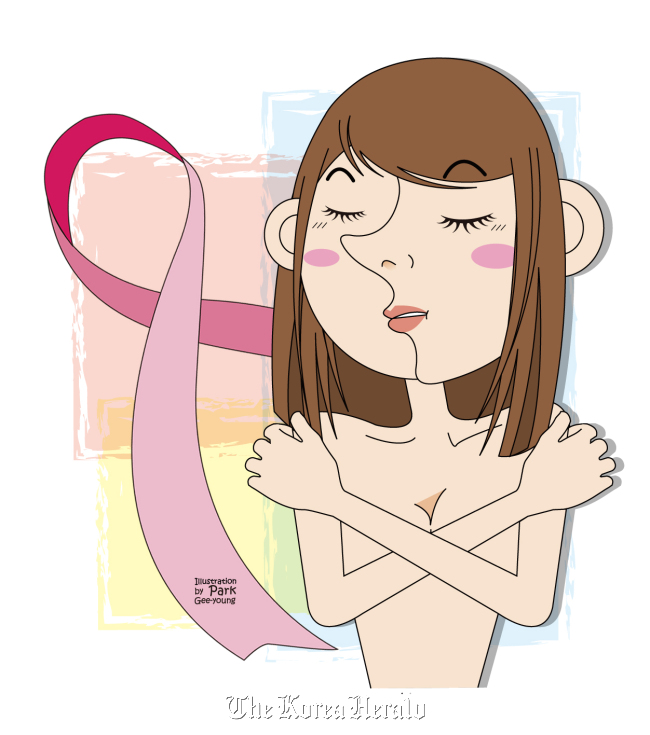 The association said the number of breast cancer cases in Korea would pass the 20,000-mark soon ― possibly within this year or the next.

The research also found that the disease is increasing at a more rapid rate among women in their 50s and 60s, particularly after they reach menopause, a pattern often detected in western countries. Meanwhile, the rate of patients in their 40s dropped to 37 percent from 40 percent. Previously, the growth rate of breast cancer in Korea was relatively high among women in that age group.

“There are still many cases of breast cancer found in patients in their 40s but we need to focus on the growth rate of the disease in women over their 50s, which clearly reflects the patterns of Western countries,” said Park Chan-heun, chairman of the cancer society in Korea.

About 49 percent of cases occurred in post-menopausal women in 2010, a more than 10 percentage point increase from 39.1 percent in 1996. The median age of Korean breast cancer patients also increased from 46 to 49 in the same period.

“More breast cancer cases have been recently found among middle-aged women or baby boomers because they were active in joining the workforce, leading to the low birth and breastfeeding rates,” he said. 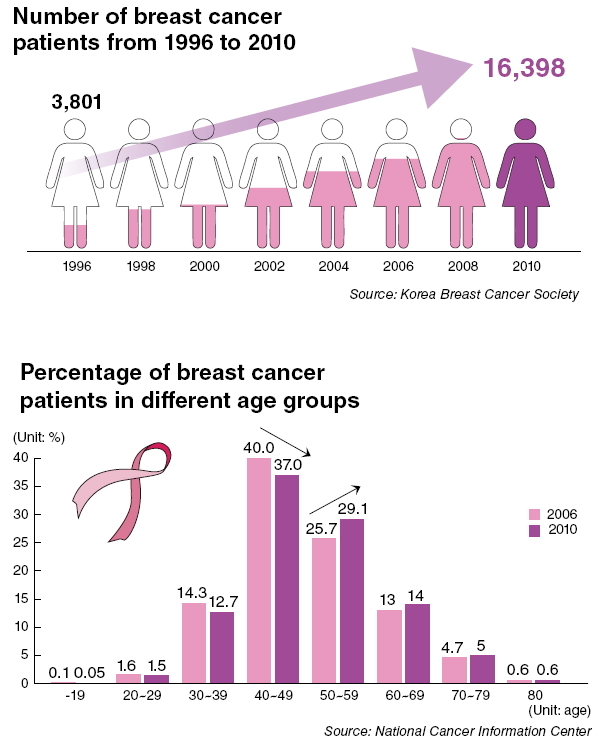 The good news is that the proportion of cancers detected early ― diagnosed in stages 0 and 1 ― is also on rise, thanks to an increase in breast cancer screening rates. Patients diagnosed with breast cancer stages 2-4 made up 47.5 percent of those diagnosed in 2010, down from 76.2 percent in 1996.

The proportion of patients with asymptomatic cancers also surged from 6.4 percent in 1996 to 32.7 percent in the same period. An increasing number of women opted for breast-conserving therapies rather than radical mastectomy, or removing the breast.

The increase in early detection has contributed to lowering the death rate of the disease. The death rate for breast cancer in Korea remains one of the lowest among OECD-member countries. About 5.3 in a population of 100,000 die, the report said.

Watching for breast cancer is necessary for every woman over 30.

“Women in their 30s need to start self-examinations for breast cancer every month while those in their 40s need to do a breast screening once every year,” Park said.

To lower the risk of breast cancer, doctors suggest having the first child in the early 20s, breastfeeding and maintaining a healthy weight.