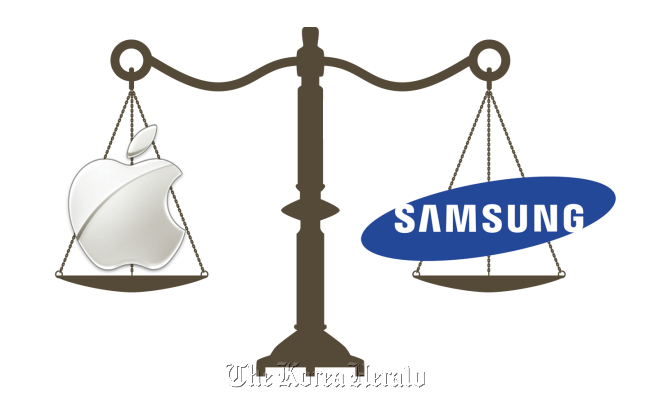 Seoul court’s ruling may be deferred after U.S. jurors come up with conclusion early Saturday


The world’s two global IT giants ― Samsung Electronics and Apple Inc. ― will face crucial court rulings this week to end their fierce patent fight as they came short of reaching an eleventh-hour compromise.

The outcomes of their multibillion-dollar patent battles in the U.S. and Korea are scheduled to be released on Friday and Saturday.

The two firms each completed their two-hour closing arguments at the court in San Jose on Wednesday, leaving it up to the nine jurors to come up with a conclusion by early Saturday, Korean time.

Samsung is currently seeking as much as $421.8 million in royalties which it claims for Apple’s infringement of two patents related to wireless mobile technology and three utility intellectual properties.

During the court session on Wednesday, Apple’s lawyer said the Suwon-based electronics maker began three intense months of copying, while Samsung’s lawyer said Apple was intending to block its “biggest and most serious competitor from even attending the game.”

“It’s a very important decision you have to make,” said Samsung’s lawyer Charles Verhoeven. “It could change the way competition works in this country.”

He also claimed that the Korean tech behemoth did not copy Apple’s iPhone but attempted to make technological advancements with full glass screens for the best view of email, Internet browsers and video.

“There was no confusion, deception, consumer harm,” said Verhoeven. “Apple is here asking for what it’s not entitled to.”

Apple’s attorney Harold McElhinny, on the other hand, said to jurors that documents prove that Samsung has followed Apple’s “revolutionary” designs and that Samsung’s internal email had revealed that the firm was experiencing a “crisis of design.”

“Samsung realized how far it was falling behind the iPhone,” said McElhinny. “In those critical three months, Samsung was able to copy and incorporate” Apple’s four years of research and development “without taking any of the risk.”

The nine-member jury panel will now discuss the matter with the judge to end the month-long court case.

Another court case is scheduled at the Seoul Central District Court on Friday.

The ruling of an intellectual property rights dispute between Samsung and Apple was originally planned to take place earlier this month, but it was deferred for two weeks with the court stating it needed more time to work on the ruling statement.

But it is yet unclear if the ruling will be heard as scheduled as industry insiders have predicted that the deferral of the court session in Seoul has been set to first look at the San Jose court’s ruling.

Unless the jury panel in San Jose reaches a final verdict by Thursday, the Seoul court’s ruling is expected to come ahead of the U.S. court trial as the latter will begin at 1 a.m. on Saturday, Korean time.

“My guess is that it may be deferred for a second time to see how it is done in the U.S. before developing its own conclusion for the Seoul court,” said an industry source.