In his campaign for the by-election of Gangwon governor last year, Um Ki-young, the conservative ruling party candidate, pledged to attract a nuclear power plant to the province.

He blasted his rival from the liberal main opposition party for being lukewarm on the idea, which he said would help vitalize the economy of the area.

But Um, a former president of a major broadcasting company, was put on the defensive when a nuclear power plant in northeastern Japan was crippled by an earthquake and tsunami on March 11, causing the world’s worst nuclear accident in 25 years.

With the whole nation engulfed in fears of radioactive fallout from Japan, he abruptly changed his mind, saying that a careful review was needed before deciding on the project.

His flip-flopping on the issue was not the only reason for his eventual defeat to the opposition candidate, whom he had led by a large margin in pre-election polls, but it certainly eroded his credibility.

His case has been remembered by many other politicians as a lesson that they should be more cautious about nuclear power, which has been regarded as an essential part of the country’s energy portfolio.

The failure in stabilizing the reactors at the Fukushima Daiichi plant a year after the disaster has reminded ordinary Koreans of the huge potential dangers of what they believed to be a safe, clean and cost-efficient source of producing electricity.

“Before the Fukushima accident, a small number of environmental groups raised voices for abandoning nuclear power, but now they are joined by figures from a wide spectrum of professions,” said Lee Heon-seok, co-head of the Joint Action for Nuclear-free Society, a coalition of about 40 civic organizations formed last June.

A growing number of civic activists, lawyers, professors and religious leaders have participated in the movement to seek alternatives to the government’s plan to expand the nuclear capacity to meet an ever-increasing demand for electricity.

Korea operates 21 reactors and plans to build 13 more ― seven of them under construction and six others planned ― by 2024 to increase the nuclear share of the country’s electricity needs to 48.5 percent from 31.2 percent last year.

The scheme may face a strong headwind as surveys have shown a rising antinuclear tide among the public in the wake of the Fukushima accident. 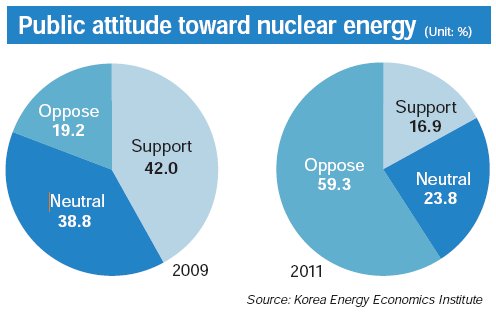 In a poll taken by the Korea Energy Economics Institute in 2009, about 42 percent of Koreans favored nuclear power and 38.8 percent remained neutral. But the corresponding figures fell to 16.9 percent and 23.8 percent in a survey conducted last August.

The proportion of respondents who opposed it jumped to 59.3 percent from 19.2 percent over the cited period.

Less than half felt nuclear power was dangerous in 2009 but the figure climbed to 75.6 percent in 2011 after Fukushima. Confidence in the safety of local nuclear power stations weakened from 70.5 percent to 52.6 percent.

More than 70 percent were in favor of building more reactors in 2009 but the proportion shrank to 38 percent last year.

Nearly 55 percent said they found no problem with a nuclear plant being built in the area near where they lived in 2009, but only 29.5 percent replied so in 2011.

Public sentiment against nuclear power was exacerbated particularly in the provinces of North Gyeongsang, South Gyeongsang and South Jeolla and the southeastern city of Busan, where most of the reactors in operation or planned are located.

Little swayed by the surge in the antinuclear tide, President Lee Myung-bak committed himself to carrying out the nuclear expansion plan in a recent news conference.

Lee argued that for Korea, which “does not produce a drop of oil,” there is no other option but nuclear power to meet the growing demand for electricity. He said abandoning nuclear energy would cause electricity rates to rise by as much as 40 percent.

Lee, who played a decisive role in gaining a $40 billion deal with the United Arab Emirates in 2009 to construct and operate four reactors, reiterated his pledge to make Korea one of the five major players in the global nuclear industry. Two years ago, his administration announced a plan to export 80 reactors by 2030 to take a 20 percent share of the world market.

His advocacy of nuclear power has drawn criticism from antinuclear activists.

“Lee’s nuclear policy is just anachronistic and turns a blind eye to the dominant public opinion,” said Kim Hye-jeong, an activist who works for the Korean Federation for Environmental Movement.

“He is leading the nation in the wrong direction to make us rely on nuclear power and thus burdened with its dangers forever,” she said.

Kim criticized the policy focusing on nuclear energy for barring the development of the renewable power industry.

The Joint Action for Nuclear-free Society also issued a statement asserting Lee was either misinformed or distorted the facts to make his case for nuclear expansion. The group said Germany has not seen higher utility bills and has continued to export electricity even after shutting down eight reactors in 2011 as part of a plan to decommission all 17 reactors by 2022.

Antinuclear groups are planning to hold a massive rally Saturday to call for the abandonment of nuclear power ahead of the first anniversary of the massive earthquake and tsunami that hit northeastern Japan, triggering the nuclear disaster.

“What we are suggesting is to phase out reactors in operation starting with the two oldest ones and discard those under construction or on the drawing board,” said Lee Heon-seok, who co-heads the civic coalition for nuclear-free society.

“Now the nation is at a critical juncture to choose whether to expand or gradually abolish nuclear power,” he said.

In support of the antinuclear campaign, Seoul Mayor Park Won-soon and heads of 45 small cities, counties and wards gathered last month to adopt a declaration pledging to go nuclear-free and turn to renewable energy. Park has pushed an initiative to cut energy consumption in the capital over the coming three years by the same amount that would make it possible to do away with a nuclear reactor.

The movement has recently taken on an increasing political implication as liberal and progressive opposition parties are trying to publicize their stances in the run-up to the Seoul Nuclear Security Summit slated for March 26-27, which President Lee hopes will be one of his crown diplomatic achievements.

Dozens of former and incumbent lawmakers from the main opposition Democratic United Party launched a group in February to push for the country’s abolition of nuclear power and transformation toward renewable energy. The DUP leaders, who have opposed Seoul’s hosting of the second nuclear summit initiated by U.S. President Barack Obama, are expected to include the group’s demands in the list of the party’s pledges for the April parliamentary elections.

Prompted by the DUP moves, the splinter United Progressive Party announced an election pledge last month to close all the reactors by 2040.

Most lawmakers of the conservative ruling Saenuri Party, however, have remained ambiguous on the nuclear issue.

Supporters for expanding nuclear capacity say more reactors should be built to cover a growing demand for electricity in a cost-effective way to reduce carbon emissions.

Kim Jin-woo, president of the KEEI, indicated Korea and other industrialized economies were set to consume more electricity with the deepening of computerization and automation and the increase of electric cars.

He also noted the cost of nuclear energy would still be far lower than other fossil fuels, even if the disposal of nuclear waste was taken into account.

Those in favor of nuclear power argue the safety of reactors in Korea has been proven through 34 years of operation without any major incident.

Regardless of their views on nuclear expansion, most experts have questioned the wisdom of the policy to keep utility rates low and agreed on the need for strengthened safety requirements, which will have incorporated the lessons learned from the Fukushima accident.

Nuclear power has shored up Seoul’s policy focused on the stable provision of cheap electricity, which is mainly designed to support industrial competitiveness. As a result, Korea’s electricity rates have been kept at about half the average level of the 34-member Organization for Economic Cooperation and Development.

With Korea’s electricity rates on the basis of 100, the corresponding figures reach 138 for the U.S., 170 for France, 221 for Britain and 242 for Japan, according to figures from the Korea Electric Power Corporation.

Announcing its decision to build a plant here last year, Toray, a Japanese manufacturer of synthetic textiles, cited Korea’s cheap electricity rates, which it said were lower than China’s and Japan’s, as the main reason for its move.

Critics say such low costs have made Korean industries and households alike consume energy in a wasteful manner.

The country’s per capita electricity consumption increased from 5,704kWh in 2000 to 9,510kWh last year, surpassing the level of Japan, whose per capita income is more than twice that of Korea’s.

Critics say Korean taxpayers have been paying for the low costs by helping the state-run utility company stay afloat despite debts of more than 50 trillion won.

“Saving electricity should go hand in hand with making more use of renewable sources such as wind, solar and geothermal,” said Lee Heon-seok of the Joint Action for Nuclear-free Society.

“If we continue to be addicted to the habit of wasting electricity, our goal to abolish nuclear power will remain out of reach,” he said.

Experts also warn of complacency with the safety of nuclear reactors, emphasizing the need to work out tighter criteria to cope with all possible scenarios.

They note that the lack of problems so far is no guarantee against future accidents.