Fancy a snack at night? Many people do. From nibbles such as cookies and candy to heavy foods such as fried chicken, beer or pizza, many indulge in eating long after dinner. Night eating syndrome, or midnight hunger, is a commonly found “disorder” among Koreans. It refers to a lack of appetite in the morning and overeating at night.

According to professor Park Gyeong-hee of Hallym University, about 10 percent of adults in Korea eat up to half of their daily calorie intake while snacking at night and could be diagnosed with night eating syndrome. Twenty-somethings make up the greatest number of those affected, marking 19.2 percent, while those in their 40s and 50s make up 8 percent. The figures reflect that office workers doing night shifts or those with a huge amount of stress tend to binge-eat at night, the researcher said. 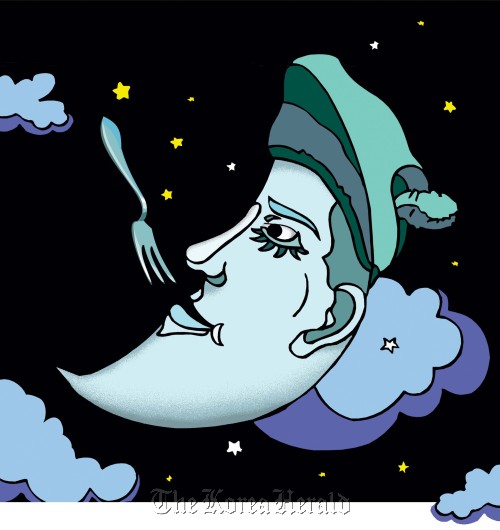 Night snacking can also potentially lead to reflux esophagitis ― a condition where acid from the stomach moves into the esophagus. A common symptom of the condition is heartburn.

The National Health Insurance Corporation said a total of 2.8 million people were treated for the disorder in 2010, marking an 18.3 percent annual growth rate.

“It is a serious matter. People often think that only eating after 9 or 10 p.m. is nocturnal eating, but in fact, eating within three hours before going to bed could be considered night-eating,” said Dr. Chung Hye-gyeong of Ewha Womans University Medical Center.

“It means that people who go to sleep around 10 p.m. should refrain from eating after 7 p.m., which is considered the conventional dinner time,” she added.

Chung advised against snacking on greasy food. And if you cannot resist eating before going to sleep, try something simple and “green,” she said.

The following are foods allowed as a last resort for nighttime snacking, and what foods snackers should avoid.