Korea’s family-owned conglomerates are coming under growing pressure as political parties from all sides are trying to exploit popular anger toward corporate greed and inequality for better chances in this year’s key elections.

Globally Samsung, LG, Hyundai Motor and other chaebol are basking in praise for their record earnings, increasing market share and technological innovation.

The same achievements, however, put them in trouble at home. As crisis deepens, even the political right has painted these industrial behemoths as oversized, greedy and ruthless profit-seekers gobbling up small vendors and self-made entrepreneurs.

But this time around, the ruling Grand National Party is unveiling its own measures to create a level playing field and heavily tax the super-rich, a notable shift from its long-standing pro-business stance. The conservative party has been struggling to emerge from its morass since a series of electoral setbacks last year.

Reformists, regardless of party affiliation, are cashing in on the rising public disillusionment over the shenanigans of the country’s political and business elite.

That downbeat voter sentiment, coupled with strife between the haves and have-nots here and abroad, is lending impetus to the chaebol-bashing crusade.

Last week, politicians catapulted bakeries and cafes to the center of the battle. President Lee Myung-bak even called on conglomerates to stop branching out into markets that were once occupied by mom-and-pop stores.

“Second- or third-generation chaebol offspring may be running bakeries and cafes as a pastime, but it is a means of living for average Koreans,” Lee told a meeting with senior secretaries on Jan. 25.

The president’s remarks soon prompted a chain of retreats from the food retail business among the families behind Samsung, LG and Hyundai Motor.

Samsung’s Hotel Shilla is now closing 27 outlets of its upscale caf-bakery chain. Hyundai decided to transform two cafes at its headquarters and its affiliated hotel into lounges for workers and guests. Our Home, which runs cafeterias for LG Group, also announced it will stop selling traditional Korean foodstuff like fermented soybeans and sundae, or blood sausage. 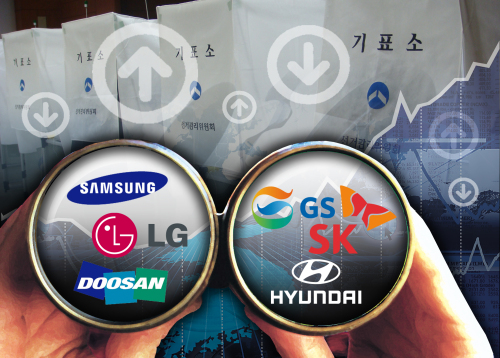 But the withdrawals are likely to have a limited impact, if any, on the already teetering neighborhood bakeries given their minor share in the market and the difference in customer targets. Our Home, for instance, made merely 150 million won ($133,000) last year by selling fermented soybeans and sundae.

“It demonstrates how instantly public opinion can sway corporate management and shape the market,” said an official at a major company who declined to be identified. “Some politicians and activists just seem so keen to cast the first stone without thinking who will be hit by it.”

In August, Samsung, SK and other groups pulled out from businesses entailing procuring maintenance, repair and operation supplies, many of which were operated by the children of their owners. Skeptics slammed the practice, labeling the MRO units as a method to dodge taxes and hoard wealth within their families.

The incident comes on the heels of mounting criticism that the industry giants choke the growth of their subcontractors and cripple competition by forcing price cuts for supplies and granting lucrative orders to their own subsidiaries.

As conglomerates expand exponentially, President Lee, a former chief executive of a local builder, rolled back on his promise to cut corporate taxes and embarked on a drive to mend asymmetrical ties between large companies and their smaller suppliers.

Under his “fair society” mantra, Lee launched a presidential panel last year headed by Chung Un-chan, a former premier and leading Keynesian economist. The Commission on Shared Growth for Large and Small Companies crafted a “mutual growth index” to assess the frontrunners on how well they distribute their wealth with suppliers.

But the move sparked fury from industry. Executives of major conglomerates lambasted the so-called “profit-sharing” scheme, calling the panel “anti-market.” Though most of them agreed to comply with the policy later, tensions persist between Chung and the business leaders.

“Chaebol wields virtually omnipotent power in Korean society,” he said in a recent interview with a local news outlet.

“It played a role in boosting the national economy. But it grew up in a privileged environment at the same time, receiving a multitude of advantages in tax, financing and real estate from the government. It’s time to look after its smaller partners.”

Meanwhile, the Fair Trade Commission is stepping up its crackdown on the country’s 56 largest companies for any irregularities in their transactions. The antitrust watchdog has also been pushing major local retailers to cut commission fees for small vendors.

But the ongoing hullabaloo misses the point, critics say. The political rhetoric lacks the genuine will to embark on sweeping chaebol reform and create a social safety net, according to them.

“Politicians may have brought up problems we face such as social cohesion and mutual growth, but they should refrain from tagging conglomerates as the culprit behind everything,” says a senior researcher at a think tank in Seoul, who asked not to be named due to the sensitivity of the subject.

“Intrinsic discussions that reflect all different aspects of society should be included to tackle the challenges in earnest.”

You Jong-il, a vocal chaebol critic and a professor at the KDI School of Public Policy and Management, says the prevailing trend will likely be a temporary blip in the political circle.

“Even though lawmakers are clamoring for things like co-prosperity, ecosystemic development and shared growth for the time being, nothing will be changed unless the government sets out on far-reaching reforms that could topple the tycoon-focused governance structure within conglomerates.”