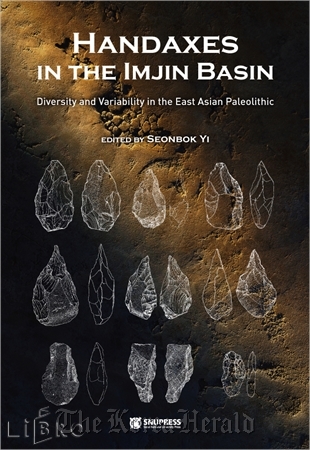 Many things remain a mystery about the early Paleolithic period, especially the one of East Asia. Many of the Paleolithic remains found in the region have added to such questions. Most importantly, hand axes, which had been considered some of the most significant remains of the early Paleolithic in Europe and Africa, were not found in Asia until the late 1970s.

Yet as the first set of Acheulian-like hand axes were found in Korea’s Imjin River basin in Gyeonggi Province in the 1970s, the international archeology scene saw a new turn for the early Paleolithic Asia studies. Since then, similar hand-axe remains have been discovered in China and other Asian countries.

Edited by Korean scholar Yi Seon-bok, SNU Press’s English-language book “Handaxes in the Imjin Basin” comprises of 10 scholarly articles presented during the 2008 Seoul Paleolithic Conference, which was held with support from the Kyujanggak Center for Korean Studies.

“(Discovery of the hand axes in the Imjin River basin in central Seoul) makes it clear that mere presence or absence of certain stone tools cannot provide meaningful ground for understanding the real patterning of Paleolithic records,” wrote editor Yi. “These pieces nevertheless do not appear to be identical to similar artifacts found in more westerly locale.”

Other featured articles also deal with the findings in of Asia Paleolithic research, especially the hand axes discovered in the region. Notably, scholar Michael Petraglia presents new Acheulian discoveries in India in his article “Assessment and Critique of Chronometric Ages Associated with ‘Early’ Acheuliann Assemblages in the Indian Subcontinent,” and claims there is a significant difference between Acheulean and East Asian assemblages.

Another scholar Truman Simanjuntak, on the other hand, examines the hand axes discovered in Indonesia, and their complex link to the culture of the particular time period.

Yi Seon-bok, the book’s editor, currently works as a professor of archaeology and the director of the Russian Center at Seoul National University. He received his M.A. and Ph.D degrees from the department of anthropology at Arizona State University in the U.S. He returned to Seoul in 1986, and has been engaged in archaeological studies and research. One of his books, “Introduction to Archaeology,” which was published in 1988, is known as the only introductory archaeology textbook written in Korean.