A presidential qualification yet to be verified

In a survey of 1,000 likely voters, conducted a day after the announcement of Kim’s death, Rep. Park Geun-hye, the interim leader of the ruling Grand National Party, was chosen by the largest proportion (29.9 percent) as the best candidate to deal with an emergency in North Korea. Entrepreneur-turned-professor Ahn Cheol-soo, who has risen as a strong potential presidential contender over the past months, was picked by 13.2 percent. He was followed by Moon Jae-in, former chief secretary to late President Roh Moo-hyun, with 6.3 percent, GNP lawmaker Chung Mong-joon with 5.3 percent, former opposition leader Rep. Sohn Hak-kyu with 4.4 percent, former GNP leader Lee Hoi-chang with 3.8 percent and Gyeonggi Gov. Kim Moon-soo at 3.4 percent. 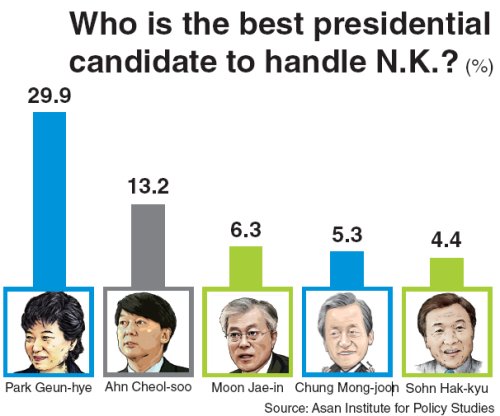 Ahn, who has enjoyed an enthusiastic following among young voters for his integrity and achievements as a medical doctor, software mogul and professor, has seen his inexperience in security issues erode his lead over Park in hypothetical presidential matchups.

In the aftermath of the North Korean dictator’s death, Park narrowed the gap in approval ratings with Ahn from 10 percent in a Dec. 17 poll to 5.5 percent in a survey held two weeks later.

The former GNP leader, who is the eldest daughter of late President Park Chung-hee, has stressed the need to “upgrade” President Lee Myung-bak’s rigid policy toward the North. In a meeting with reporters last year, Park said her policy would focus on striking a balance between security and exchanges, suggesting an eased stance on inter-Korean matters.

But she drew a line in her conciliatory approach by opposing sending a parliamentary delegation to Pyongyang to mourn Kim Jong-il’s death.

Ahn, dean of Seoul National University’s Graduate School of Convergence Science and Technology, has made no specific comments on his position regarding North Korea, just saying he is “liberal on the economy and conservative on security.”

Kim Geun-shik, politics professor at Kyungnam University, was quoted as saying by a local daily that Ahn raised no objections to his harsh criticism of President Lee’s stance and his proposal to enhance the policy of engagement with the North during their meetings.

Woo Jung-yeop, research fellow at the Asan Institute for Policy Studies, a private think tank in Seoul, said Ahn should not leave his thoughts on the North ambiguous any longer if he is to run for the presidency.