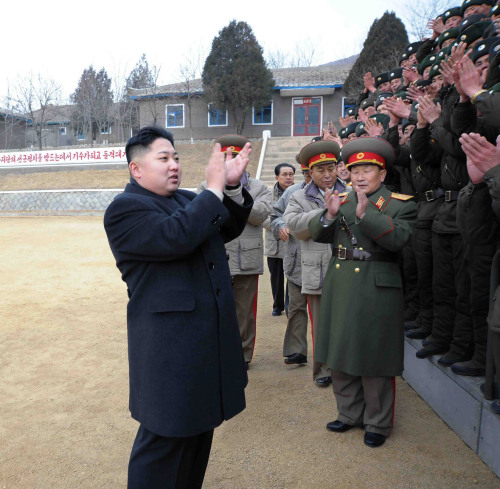 
About an hour before closing time on Jan. 6, a rumor that a North Korean nuclear reactor had exploded spread through the South Korean stock market, dragging the KOSPI down nearly 10 points for several minutes.

Less than two weeks before, the market was hit by rumors that Kim Jong-un, the youngest son and successor of the late North Korean leader Kim Jong-il, had been assassinated and China was sending troops into the North. With individual investors dumping their shares, the index fell by more than 2 percent in just a few minutes, though it made a partial recovery before the market closed.

Concerns over North Korea’s volatile situation, deepened by Kim Jong-il’s death last month, has been a hot bed for such false rumors, which have swayed South Korea’s stock exchange. Pyongyang’s announcement of Kim’s death, which came two days after he died on Dec. 17, rattled financial markets in Seoul, causing the KOSPI to plunge by 3.43 percent to close at 1776.93.

Market watchers say that false rumors about North Korea, most of which appear to be spread by people investing in derivative products that make profits when stock prices fall, are expected to continue stirring up the market in the coming period as long as uncertainties over the North’s failing regime linger.

Though not in such an instant and intermittent manner, North Korea is also positioned to be a factor that could have an impact on the two key elections to be held in the South this year.

With economic difficulties and political realignments gripping public attention in the initial part of an election year, North Korean issues appear to have been sidelined after worries over the post-Kim Jong-il era were subdued. In a recent survey by Gallup Korea of about 1,000 adults, more than half cited reinvigorating the economy as the most urgent task for the next president, while 8.1 percent said improving inter-Korean relations should be given top priority.

But some political observers note that depending on what course of action the new leadership in Pyongyang takes, the North Korean factor could influence voter sentiment in the lead-up to parliamentary and presidential elections in April and December, respectively.

In an editorial jointly run in the Jan. 1 issues of its party and military media organs, Pyongyang suggested it would attempt to influence the elections in the South to see the liberal opposition, which is conciliatory toward the North, take back power from the conservative ruling party.

“The (South Korean) ruling forces have become the subject of grave judgment from the people,” the editorial claimed.

In a statement issued by the powerful National Defense Commission on Dec. 30, North Korea said it would never deal with the administration of President Lee Myung-bak, whose single five-year term finishes in February 2013, denouncing it for barring South Koreans from visiting Pyongyang to pay respects to Kim Jong-il.

‘A dichotomy of war and peace’

Jeung Young-tai, senior research fellow at the Korea Institute for National Unification, a state-run think tank in Seoul, analyzed the joint editorial as implying that the North would attempt to bring about a change of power in the South by “framing the structure of the elections as a dichotomy of war and peace.”

From the viewpoint of the election logic, experts here note, it will not suit North Korea’s purpose to go beyond harsh rhetoric to make provocative acts against South Korea.

“I doubt that the North will turn to severe military provocations that could result in casualties,” said Woo Jung-yeop, research fellow at the Asan Institute for Policy Studies, adding it may be well aware such hostilities would act against liberal candidates running in South Korean elections.

He indicated that the sinking of a South Korean naval vessel, which was blamed on North Korea, and its shelling of a border island last year had led many young South Koreans to perceive the North as an “enemy.” Unlike those in their 30s and 40s, who are more supportive of engaging the North, a majority of 20-somethings are as conservative and reserved as those aged over 50 on inter-Korean issues, said Woo.

“Frankly speaking, I have thought little of North Korean matters, which have little to do with my everyday life,” said a 22-year-old university student who wanted to be identified by his family name Park. “But any provocative act from the North will not make me wince back and vote for a candidate trying to appease it.”

Under the circumstances, in which South Koreans are cautious over possible restiveness in North Korea, liberal opposition contenders are unlikely to be actively taking issue with how to treat the impoverished neighbor during their campaigns, political observers say.

The Lee administration has also been moving in step with the U.S. and China to avoid putting pressure on the new North Korean leadership and give it enough time to stabilize before returning to the negotiations on dismantling Pyongyang’s nuclear weapons program.

What worries North Korea watchers here most is the possibility that Kim Jong-un and his mentors’ group, swayed by hard-line military leaders, will attempt to consolidate their grip on power and quiet the people’s growing grievances by making military provocations against the South.

North Korea might cause a clash along the Demilitarized Zone dividing the Korean Peninsula or in the West Sea near the maritime border. It could also conduct a third nuclear test or test-fire long-range missiles to demonstrate that Kim Jong-un is sticking to his father’s “seongun,” or military-first, policy, experts say.

A survey of 1,017 South Korean adults, released by the Korea Institute for Defense Analyses earlier this month, showed that more than 80 percent believed Pyongyang would not abandon its nuclear arms program and nearly half feared the divided neighbors could have some sort of a border clash.

Heightened tensions with North Korea would put under scrutiny the capability of major presidential candidates to cope with the North and other security issues.

“What thoughts and policies a candidate has toward the North should be one of the crucial criteria for choosing the next national leader,” said Woo of the Asan institute.