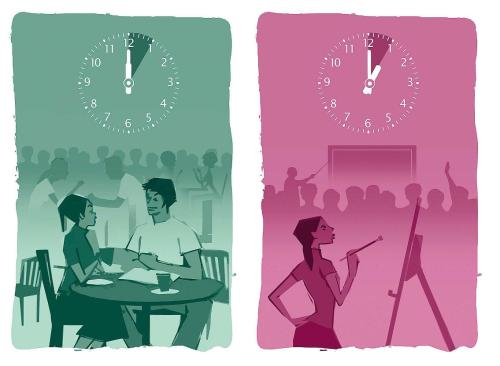 
For many Seoulites who often find themselves working nights and weekends to survive in the city of excessive competition and gloomy unemployment, lunch break is like a blessing to endure the long, tiring day.

Feeling the one-hour break is too precious to waste on eating and gossiping with co-workers, a growing number of people here are coming up with different ideas to make the time more worthwhile.

“I recently had three blind dates over lunch,” Lim Soo-hyun, 31, who works in a office located in Myeong-dong, central Seoul, said. “The guys I was set up with worked around the area, so meeting up for lunch on a weekday seemed like a good idea.

“No, I haven’t found my dream man yet ― all the more reason to keep the meetings short and simple over lunch,” Lim added.

Lim is not the only person to add a twist to traditional blind dates here, which have generally been held over a formal dinner or tea on the weekend.

For men, who usually pay for the dinners and drinks, meeting new women over lunch not only saves time, but also money. A lunch blind date also saves the embarrassment for both parties― especially if they don’t feel too great about their date.

“An hour is just enough time to decide whether you want to see the person again or not,” Lim said.

Gong Gyung-min, president of lunchting.com, an online matchmaking website mainly for office workers in the Yeouido financial district, said about 600 couples meet through his website each day.

The website, which was launched July last year, opens from 9 a.m. through 11 a.m. everyday, allowing users to ask someone within 500 meters out on a lunch date. To become a member, one has to upload information about him or herself including a photograph and the location of their office. The site currently has more than 20,000 members.

“We first got the idea after meeting Yeouido office workers who said they just didn’t have the time to meet someone on weekends,” Gong said. “We plan to expand the service to other areas including Gangnam.”

The growing popularity of “lunch-ting” triggered the launch of other matchmaking websites such as www.ha-so.co.kr.

According to a recent survey conducted on some 1,200 office workers by web portal Saramin, more than 24 percent answered they “do something” ― such as shopping, exercising and studying ― over lunch instead of just eating.

Thirty-nine percent of those surveyed spent their lunch break reading books or learning foreign languages. Up to 25 percent said they spend the time shopping for groceries and other necessities. Some 13 percent exercised, while 9 percent took a nap.

A growing number of office workers are also spending lunchtime to learn something useful.

Offered by the Seoul Arts Academy since 2007, the “Noon Lecture” series have been gaining steady popularity among people working near Gwanghwamun, where the center is located.

“I took the ‘Noon Classical Music’ lectures last year and fell in love with the whole program. I plan to take the art course this semester,” said Seo Ha-na, 34. “I love the feeling of enjoying a bit of culture over lunch with people who share the same interest.”

The Sejong Arts Academy is offering three lunch courses and two night courses in the first semester of 2012, which will run March 6 through May 25.

The Noon Lecture, which also includes a sandwich for students, is held from 12:05 p.m. to 1 p.m. once a week, convenient time-wise, with little burden for workers. The three lunch lectures in the upcoming semester are “Noon Classical Music,” “Noon Opera” and “Noon Art,” with columnist Chung Joon-ho, music critic Lee Yong-sook and art historian Kang Hong-gu leading the three classes, respectively. Applications can be made by calling (02) 399-1606 or sending an email to academy@sejongpac.or.kr.

The Sejong Arts Center also offers lunch concerts with traditional music and food for 90 minutes from noon beginning March 1. Each concert is priced at 50,000 won and English and Japanese language services will be provided for foreign viewers. The lineup and other details are available at www.sejongpac.or.kr.

Due to the popularity of the lectures, the academy allows one person to sign up for no more than one lecture per semester.

“We have been trying to prepare different lectures each year that embrace not just classical music, but ballet and other lesser known genres,” said Kim Joo-seok at the academy’s public relations bureau. “Many students come back after experiencing how much help the lectures are in understanding culture they once thought were difficult and boring.“

The course offers eight classes on the history of wine, ways of reading wine labels and choosing good wine, wine manners and other interesting knowledge from noon through 1 p.m., on Tuesdays and Thursdays. Also provided during the course are special wine and finger-foods.

“I never thought I could make time for all eight classes, but coming in during lunch break was much easier than I thought,” said Kim Sang-gook, 38, who took the course last year.

Reasonably priced at 80,000 won, the class has people competing for the 20 spaces available. For information and application, visit www.academy.winenara.com.

La Cuisine, located in Taepyeongro, central Seoul, launched a Friday lunchtime cooking class in 2009. While one hour seems like a short time to cook a proper meal, the academy has all the ingredients prepared beforehand to make it work within the limited amount of time.

“A growing number of people have been signing up for the 20-member class over the previous years with a surprising number of men,” said Park Sun-young of the academy, speaking on the phone. “Busy working moms and brides-to-be are of course our main students.”

Lecture fees for the lunchtime cooking classes vary depending on the type of cuisine which spans Korean, Chinese and Japanese, French, and Italian. For information, visit www.lacuisine.co.kr.

People who feel taking classes is “too much effort” are choosing to visit gyms or nearby bookstores to make the time worthwhile in their own ways.

“Working out over lunch is so much easier than finding time after work. Light exercise during the day also seems to improve work efficiency,” Min Kyu-sig, 32, said.

With his New Year resolution set on losing four kilograms, Min has been spending 40 minutes of his lunch break on exercising every day since Jan. 1.