2012 year for changes of power around the world 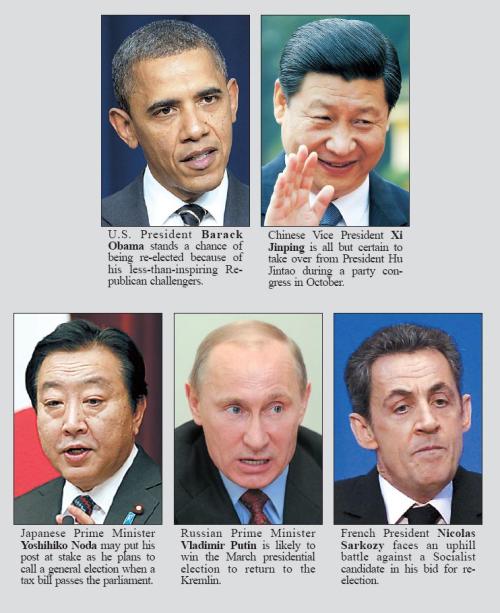 Last year saw dictatorial rulers in North Africa and the Middle East ousted or killed in popular uprisings and leaders in southern European states voted out of office in the midst of the eurozone crisis. In the closing days of the year, the death of North Korean dictator Kim Jong-il made headlines across the globe.

The year of 2012 may witness a far more sweeping change of national rulers through elections.

According to the International Foundation for Electoral Systems, a Washington, D.C.-based nonprofit organization dedicated to promoting fair elections around the world, 29 nations are scheduled to hold presidential elections in 2012 with about 50 countries preparing for parliamentary polls.

Among the states to elect a new president are the U.S., France and Russia. China will change its leaders during a Communist Party congress that is expected to take place in October.

Japanese voters may also go to the polls this year for a parliamentary election, which would decide whether the current prime minister stays in power.

With major political leaders preoccupied with internal politics for much of the year, they will not be positioned to focus on key international issues. The need to score points with the domestic electorate will likely lead them to take more nationalist stances on issues that require global cooperation.

That is worrisome for the world, especially at a time when countries should continue making concerted efforts to cope with a deteriorating economic climate.

The situation on the Korean Peninsula will remain highly fluid as leadership elections in surrounding powers come alongside the presidential and parliamentary elections in South Korea and the hereditary power transition in North Korea.

U.S. voters will decide whether President Barack Obama deserves a second term on Nov. 6 and Chinese Vice President Xi Jinping is all but certain to take over from President Hu Jintao as party secretary general, probably before the U.S. election.

Russian Prime Minister Vladimir Putin is likely to win the March 4 presidential election to return to the Kremlin, despite growing public protests over his job-swap deal with President Dmitry Medvedev.

Japanese Prime Minister Yoshihiko Noda, who is trying to bolster Tokyo’s position against China’s growing power with a strengthened partnership with the U.S., may also put his post at stake as he plans to call a general election as soon as a bill on increasing consumption tax rates passes the parliament, possibly in March.

“For the time being, internal politics is expected to lead the major powers to take a cautious approach to regional issues, including matters involving the Korean Peninsula,” said Hwang Ji-hwan, professor of international relations at the University of Seoul.

“Both the U.S. and China will not want to raise tensions in Northeast Asia as they face crucial domestic political events,” he said.

The professor, however, noted that after the dust has settled, the underlying conflict between the rival powers may rise to the surface, complicating the situation surrounding the peninsula.

Obama, a Democrat, who stands a chance of being re-elected because of his less-than-inspiring Republican challengers, is expected to push a policy to re-engage East Asia after a decade of preoccupation with Iraq and Afghanistan. If a Republican candidate, probably former Massachusetts Gov. Mitt Romney, wins the presidency by exploiting voters’ discontent with a stagnant economy, the U.S. is likely to take a harder stance toward China. Romney has vowed that as president he would strengthen tariff barriers to Chinese goods if China refuses to let its currency float.

Increased pressure from the U.S. will be matched by a surge of tough and nationalist talk from China, whose new leadership can hardly afford to show the appearance of being compromising or even flexible during their initial period in power. Some 70 percent of China’s top leadership will be changed at the party congress, with the generational handover of power being completed next year when Xi and Vice Premier Li Keqiang taking posts of president and prime minister from Hu and Wen Jiabao.

Taking back the helm of Russia, Putin is also expected to push for a bigger voice over Northeast Asia, trying to realize a project to build a gas pipeline from Siberia to South Korea through North Korea. Revenues from resources development in Siberia appear to be a key part of Putin’s plan to further boost the Russian economy and thus pave the way for him to serve another 12 years as president.

The possibility of heightened competition and confrontation among global powers requires South Korea to be on full alert over their future, experts here note.

“The reality facing the Korean Peninsula leaves little room for us to consume our political resources in domestic conflicts between liberals and conservatives,” commented Moon Jung-in, politics professor at Yonsei University.

He said South Korea’s next president, who will be chosen in the Dec. 19 election, will have to show leadership in forging a strategy to get through the era of uncertainty through national consensus.

Many experts indicate the new administration is required to improve relations with China while maintaining the alliance with the U.S. to expand its room for diplomatic maneuvering.

“Seoul needs to share more common understanding with Beijing,” said Hwang, predicting whoever will be elected as president will move to shift President Lee Myung-bak’s policy of leaning toward the U.S. closer to the “central zone.”

Other parts of world

In other parts of the world, presidential elections in Taiwan, France and Venezuela will draw keen attention.

The result of Taiwan’s presidential election set for Jan. 14 could have significant implications for U.S.-China relations.

French President Nicolas Sarkozy is facing an uphill battle against Socialist candidate Francois Hollande in his bid for re-election. With many voters disenchanted with what they see as his frivolous behavior, Sarkozy will try to highlight his competence to gain the upper hand over his inexperienced contender. The likeliest second round set for May 6 is expected to be extremely close. Sarkozy’s possible leaning toward the theme of protecting France’s interests may affect international efforts to solve the eurozone crisis.

Two other European countries ― Finland and Iceland ― are also scheduled to hold presidential elections on Jan. 22 and June 30, respectively.

Most of Latin America’s attention in 2012 will be focused on Venezuela, where Hugo Chavez faces his toughest electoral battle since taking office in 1999. His fate in the Oct. 7 election is likely to be swayed by whether he recovers sufficiently from cancer to carry out his customary energetic campaign.

The Dominican Republic and Mexico will hold presidential elections on May 16 and July 1, respectively, to end the era of the term-limited leaders Leonel Fernandez and Felipe Calderon.

Presidential elections in Yemen and possibly in Egypt in the early part of the year will serve as barometers of whether the popular anger that toppled dictators in the Arab spring last year could lead to building a institutional foundation for stable democracy.

Some sub-Saharan African countries including Senegal, Mali and Kenya are also scheduled to hold presidential elections this year, setting democratic examples for many other regional nations which experts note may be subject to popular uprisings against corrupt and oppressive governments.