The competition to becoming the best selling foreign car in Korea is becoming a showdown between a box-like Japanese car and two German premium sedans.

The Cube of Nissan has emerged as a powerful player in the nation’s import car market, becoming the best-selling model last month.

In November, the Cube, a multi-purpose vehicle, beat the two previously most popular models ― the 520d of BMW and the E300 of Mercedes-Benz ― to reach No. 1 in sales among import models in the Korean market.

All eyes are now on the three models’ final December sales figures and whether the Cube will secure the top place for the second consecutive month. 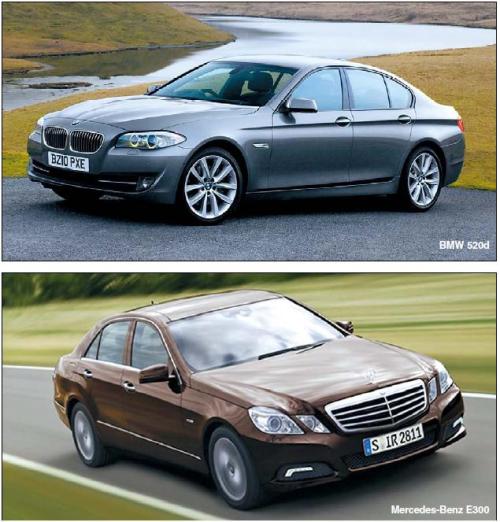 The three models are also likely to lead the local import market during the first quarter of 2012 at least.

Nissan saw its sales of the third-generation Cube, which was launched in Korea last August, surge by 126.2 percent from a month earlier.

This the first time in 19 months that a Japanese vehicle has been the best-selling model since Toyota Motor’s Camry in April 2010.

The Cube, with an engine capacity of 1.8 liters, has garnered attention from Korean consumers in the middle-income bracket, with prices ranging from 21.9 million won ($19,100) to 24.9 million won, local dealers say.

Its price tag is similar to that of Hyundai Motor’s Tucson ix and Kia Motors’ Sportage R.

The third-generation Cube was first revealed at the Los Angeles International Auto Show in November 2008. While this is the third incarnation of the vehicle, it is being offered in export markets, including European and North American markets, for the first time.

The second-generation Cube was released in 2002 with a larger interior than the previous model.

The first-generation Cube was introduced in 1998. The first model was sold only in Japan, though privately exported to the U.K., Australia and Hong Kong.

For Nissan, this is the first time in history that one of its models has topped the sales list in Korea.

The Japanese carmaker, which also sells the Infiniti sedan series in Korea, took fourth place in November among foreign carmakers thanks to the noteworthy sales of the Cube. It overtook Volkswagen in the monthly ranking.

About four months ago, Nissan Korea spokespeople unveiled their company’s goal to attract a portion of customers of the big three ― BMW, Mercedes-Benz and Audi ― by diversifying Infiniti models, in addition to targeting middle-income consumers with the Cube.

The second-largest automaker in Japan has set the goal of making the Infiniti series one of the top three import brands in the premium luxury segment.

Though Nissan is expected to rank between seventh and ninth for yearly sales in 2011, there is a high possibility that it will be included in the top five in Korea next year as long as the current pace continues.