December is a month of year-end parties. Nights of drinking and dining fill people’s schedules.

In Korea, nights out are an important part of socialization, especially at the year’s end. According to Samsung Medical Center, about 30 percent of salaried workers are habitual drinkers. 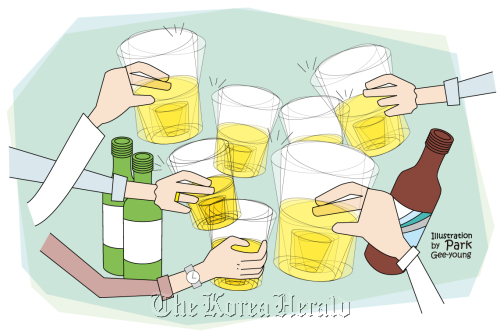 1. Does a hangover mean poor health?

No, a hangover is a natural reactions to alcohol. A healthy person’s liver can process about 160 grams of alcohol in 24 hours at most. That is equivalent to three bottles of soju or 16 bottles of beer. If you consume more than your body can manage, you will get a hangover within about 12 hours. A hangover could cause inflammation of the stomach wall and abnormal of heart or lung functions. It is also associated with sexual dysfunction and irregular menstruation.

But different people react differently to alcohol, and a hangover cannot be used to gauge whether someone is in good or poor health.

2. Why do we feel hungry the day after a drinking binge?

Low blood sugar is one main reason. Because alcohol interferes with the synthesis of glucose, you feel lethargic and hungrier than usual the day after drinking. You will also feel thirsty because alcohol increases sweating and urination, while also discharging minerals from the body.

This is a temporary phenomenon but can badly affect your concentration.

Usually, hunger subsides you eat, and drinking honey or sugared water can also bring your blood sugar levels back to normal. However, don’t overeat, as this could impose huge stress on the stomach, which is already suffering from a stormy night of drinking.

3. Can hangover drinks help you recover?

Yes, but don’t overestimate their effects.

The asparagine in some products decomposes alcohol and assists recovery from its toxic effects. Still, it is questionable whether the effect of the acid is strong enough to save a drunk person from a headache or stomachache.

4. Why do people’s moods change when drunk?

With a blood alcohol concentration level at 25-50 milligrams per deciliter, equivalent to 0.02-0.05 percent, people usually feel at ease and dozy. At 50-100 mg/dl, they become talkative and less aware of their surroundings. On the 100-200 mg/dl level, they have trouble with decision-making, concentration and memorization. Their speech also becomes slow. With around 200-300 mg/dl, they may feel disgusted or extremely excited. With 300-400 mg/dl in their system unconsciousness and loss of memory are typical.

5. What is the surest way to get over hangover?

Drinking plain water or coffee or vomiting may not be of great help. Instead, try drinking spicy soup, juice or sports drinks.

― Avoid drinking without eating: Drinking when the stomach is empty will worsen whatever symptoms you have. A full stomach will slow the time it takes for alcohol to find its way to the intestines, liver, brain and other organs.

― Don’t drink boiler-makers: Mixing toxins is not the best way to enjoy drinking. It hurts your health. Don’t mix spirits and soda, either.

― Drink lots of water: Water can help the body deal with alcohol and minimize hangover effects. If water is not available, drink juice or eat fruit. In the morning after a drinking binge, make sure you drink plenty of water in order to replenish lost fluids.