By-elections a prelude to presidential race?

Some potential candidates going all out in campaign activities

“Sorry but my (right) hand hurts,” said Park, who had shaken hands with voters all day long. The former chairwoman of the Grand National Party was visiting the welfare center as part of her hectic campaigning for a party colleague running for ward chief in the southeastern port city. She met disabled people at a care facility and mingled with vendors at outdoor markets for hours in the rain, allowing photographers to capture her biting into a dumpling.

Such appearances, political observers say, contrast with her previous attitude, which seemed somewhat aloof to the public.

Since the campaign for the Oct. 26 by-elections kicked off last Thursday, Park has been throwing herself into a flurry of activities designed to narrow the distance with voters and demonstrate her policy expertise as well as help rally support for party candidates.

After joining the GNP candidate for Seoul mayor, Na Kyung-won, in meeting job-seekers and venture entrepreneurs on the morning of the first campaign day, Park crisscrossed a southwestern district in the capital, stopping by offices, shops and a fire station. With little rest after the Busan trip, Park packed her weekend schedule with a get-together with picnicking citizens and visits to a traffic monitoring center, a police station and other public facilities.

She visited Hamyang, South Gyeongsang Province, Monday, to campaign for a GNP candidate. Thousands of residents took to the streets to see her, raising hopes in her party that it will win back the post of county head it has lost to opposition or independent candidates in the previous four elections.

Rep. Sohn Hak-kyu, chairman of the main opposition Democratic Party, has been no less eager to plunge himself into campaigning. Just past midnight on the first campaign day, he appeared at a fish market in Seoul with Park Won-soon, the lawyer-turned-civic activist running for Seoul mayor for the liberal bloc. He led Park, who looked somewhat awkward, to shake hands with vendors and ask for their support.

Sohn spent the whole day accompanying Park through a string of campaign activities which ended with a meeting with a group of youths late at night. The DP leader, who assumed the role of chief campaigner for Park, tried to rally support for the activist over the weekend, attending various events and mingling with citizens in a downtown park and a shopping district. He even sang a song at an outdoor performance.

Moon Jae-in, former chief of staff for late President Roh Moo-hyun, also departed from his shunning of campaign activities and took the stage to deliver a speech in support of Park at a rally in Seoul last Thursday. On the weekend, he returned to Busan, where he had established a legal practice jointly with Roh in 1982, to campaign for a DP candidate for a ward chief. Moon went to the same outdoor markets the former GNP leader visited days earlier and appealed to voters to support the opposition candidate, who served as an aide to Roh on public relations.

Political observers say the active involvement of the three key potential presidential runners is transforming the upcoming by-elections to pick the Seoul mayor and heads of 11 small cities, wards and counties as well as 30 local councilors into a skirmish foreshadowing their showdown next year. Whether the by-elections are of such a nature will become clear if entrepreneur-turned-professor Ahn Cheol-soo comes forward to support the civic activist to whom he conceded his bid for Seoul mayor early last month.

In such an eventuality, the Seoul mayoral race could be viewed as a proxy war between former GNP chairwoman Park and the professor, while the contest in the Dong-gu (East ward) of Busan is taking shape as being between Park and Moon, observers say.

The outcome of the by-elections is also expected to be a barometer for the April parliamentary elections to be followed by the presidential poll in December.

The ex-GNP leader, eldest daughter of late President Park Chung-hee, appears to be attempting to consolidate her position as presidential frontrunner, countering the surge of nonpartisan Ahn, through her by-election campaign activities.

She witnessed her leader status, which had not been threatened in recent years, overshadowed by the rise of the 50-year-old professor in just over a week when he hinted at his possible independent bid for Seoul mayor and then stepped back to endorse the liberal activist. In some opinion polls, Ahn’s approval rating soared to nearly 50 percent ahead of support for Park and other presidential hopefuls.

Park, 59, said at the time that the “Ahn Cheol-soo syndrome” should be an occasion to make the political establishment reflect on its preoccupation with partisan wrangling and failure to pay heed to the public’s immediate concerns.

She repeated such a perception early this month when she pledged to crisscross the country to campaign for party candidates in the by-elections. “The political circle as a whole is in crisis and I will do my best to change our party and politics,” she said.

Park has mixed her humble approach to win voters’ hearts with a demonstration of her expertise on a range of policies. While meeting job-seekers, workers and market vendors, she gave a detailed explanation on employment and welfare policies that would be put into practice if she won the 2012 election. 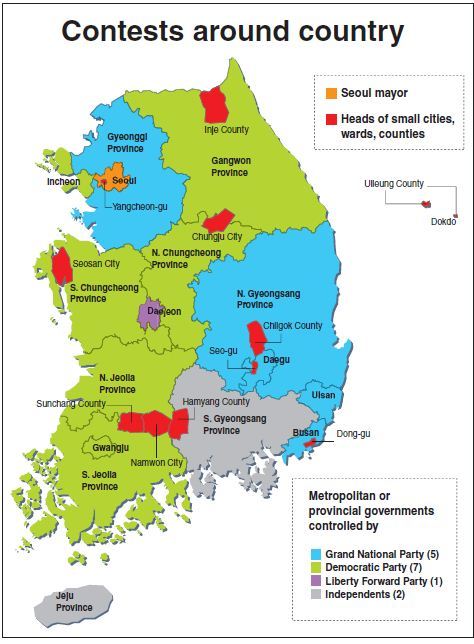 In an interview earlier this year, former Environment Minister Yoon Yeo-joon, who assisted Park as a campaign strategist during the 2004 parliamentary elections, urged Park to “take off her armor and go into the public.” Her latest activities show she has decided to do so to succeed in her second presidential challenge.

By helping reap good results in the upcoming by-elections, political analysts say, DP leader Sohn hopes to build a foundation for the merger of liberal forces, which will serve as a springboard for his presidential bid. The election of the activist as Seoul mayor, in particular, would give critical momentum to forming the opposition alliance against the conservative ruling party.

“Let’s unify the democratic force with (the election of) candidate Park and take back power by winning the parliamentary and presidential elections next year,” he said during a ceremony to kick off Park’s campaign last week.

The DP leader urgently needs to turn around his political fate. Sohn, 63, appeared to be consolidating his position as the standard-bearer of the opposition camp when he won in last April’s parliamentary by-election in a conservative constituency on the southern outskirts of Seoul. Since then, however, he has seen his approval rating slide mainly due to his indecisiveness and flip-flopping on some sensitive issues including a free trade agreement with the U.S.

He offered to resign early this month to take responsibility for a party candidate losing to the activist in the competition for a unified candidacy of the liberal opposition bloc. He later withdrew his resignation after other party leaders refused to accept it, and vowed to dedicate himself to helping Park win in the Seoul mayoral race.

An aide to Sohn expressed concerns that the DP leader would lose his initiative in the move toward the merger of opposition groups if Park failed to be elected.

Political observers are paying keen attention to whether Ahn will come forward to support the activist as the Seoul mayoral race is approaching the final stretch. Ahn, whose endorsement boosted Park to frontrunner status, has refrained from mentioning his possible election role, though he made it clear he will vote for Park.

“I know about humanities but do not know about politics,” he said last week when asked by reporters about whether to engage in the election campaign.

Calls for his support have been mounting as the civic activist’s lead over GNP candidate Na, which once widened to more than 10 percentage points, has been narrowed, putting them in a neck-and-neck race.

“In this circumstance, the winner will be decided on by a razor-thin margin, probably within 1 percentage point,” said Lee Taek-soo, head of Realmeter, a polling firm, adding that drawing more of the shrinking portion of undecided voters would hold the key to the election outcome.

Park and his aides have so far hesitated to make a formal request for Ahn’s support, which they fear may be interpreted as their admission that Park is now trailing Na, a lawyer-turned-lawmaker.

But DP officials have come forward to ask Ahn, dean of the Graduate School of Convergence Science and Technology at Seoul National University, to campaign for Park.

DP leader Sohn earlier expected Ahn to come to the aid of Park if necessary as he conceded the candidacy to the activist.

Political observers note that if Park is elected, it will further boost the nonpartisan sentiment and the prospect of Ahn entering the political arena for a presidential challenge. The opposite will lead the independent movement to fizzle out, they say.

“If the third group is not to accommodate the whole opposition forces, it will only function as a factor to split the opposition,” he said.

Observers say Moon, a lifelong confidant of late President Roh, is aiming to boost his political stature as a potential presidential runner who could replace Sohn by contributing to winning the by-elections, particularly in the district in Busan, whose voters elected Roh to the National Assembly for the first time in 1988.

The 58-year-old lawyer, whose popularity surged for months until Ahn’s rise in early September, has not committed himself to entering politics. Moon has limited his role to acting as a “catalyst” for merging diverse opposition groups into a single party, which he says is essential to defeat the conservative ruling party in next year’s elections.

Many observers, however, predict he will eventually move to the center of the political stage, charged with a self-imposed mission to revitalize the liberal philosophy and policies of Roh. A win in the Busan district would give Moon greater sway as a figure able to turn the southeastern region’s voting tide in favor of the opposition in the 2012 general and presidential polls.

Opposition parties have had a weaker presence than the conservative ruling party in Busan and nearby South Gyeongsang Province. GNP officials, however, are now alarmed over the increasingly negative voter sentiment against the ruling party in the region, whose residents expressed anger at the scrapping of an airport construction plan and a snowballing scandal over illegal loans by regional savings banks.

Along with the Dong-gu race in Busan, the re-election to pick the head of Hamyang County will be a further test of the voter sentiment there, political observers say.

The results of the races in Seosan and Chungju are also drawing attention as a litmus test of future choices by Chungcheong voters, who have held sway over past general elections in a deep-rooted rivalry between southwestern and southeastern provinces.