Two non-partisan civic leaders announced their candidacy for the Oct. 26 Seoul mayoral by-election on Wednesday, drawing attention to whether they will unite with the ruling or main opposition parties.

“I am a candidate embraceable by both the conservative and the liberal camps,” said civic activist lawyer Park Won-soon in a press conference on Wednesday, confirming his candidacy. 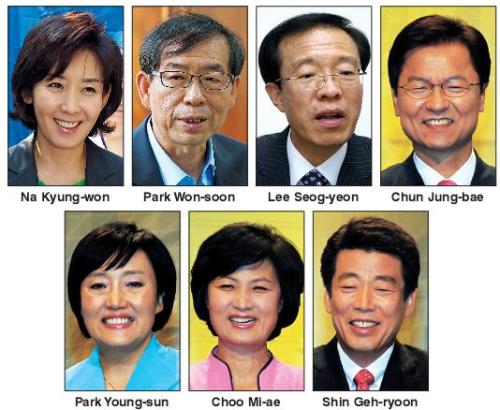 “For the past ten years, Seoul citizens have been sacrificed for the sake of the city itself,” Park said.

“Now is the time to put a brake to unnecessary construction plans and use the budget on welfare, environment and education for the people.”

He also pledged to scrap plans to finish the Han River canal, one of the Oh administration’s most controversial projects.

Lee Seog-yeon, former minister of government legislation, accepted the support of conservative civic groups and announced that he would take part in the race as an independent candidate.

“As a person who was dedicated to safeguarding Seoul against capital relocation attempts (by the Roh Moo-hyun administration), I will now step out to save Seoul from its current distresses,” Lee said on Wednesday.

He is to register himself as a candidate within the week and kick off his electoral campaign.

Though Lee left room for the possibility of competing for the Grand National Party’s nomination race to select a unified candidate, many of his supporters were not keen for him to do so.

“We would not have recommended an independent candidate, should the ruling Grand National Party have performed its expected role properly,” said a civic group leader in support of Lee.

The former minister also said that he would ask for the help of Rep. Park Geun-hye, former GNP chairwoman and frontrunner for next year’s presidential race, if he won against leading GNP hopeful Rep. Na Kyung-won to become the sole ruling camp candidate.

Park, on the other hand, refrained from making an official stance. Na is expected to confirm her candidacy within the week. Though the GNP is to hold a nomination vote on Oct. 4, Na is expected to be the only candidate.

Chun came up with the campaign title “Justice Minister of the Roh Moo-hyun government” in order to appeal to the supporters of the former liberal president, but was banned from using the name by the party’s election committee.

Shin, on the other hand, described himself as “top secretary of presidential-elect Roh Moo-hyun.”

The winner in the upcoming Oct. 26 mayoral by-election will be taking office for the next three years, according to the public election law.