A portrait of Korea’s aging population

The Organization for Economic Cooperation and Development said in the Korea report of its 2007 Economic Surveys that Korea faces “exceptionally rapid population aging” and that it needs to address social-economic problems associated with the demographic trend.

Korea became an aging society in 2000, beginning the transformation to a post-aged society, one in which people aged 65 and older make up 7 percent of the total population.

The nation will become much grayer as the number of senior residents is expected to double to 14 percent of the total population by 2018 and reach 20 percent by 2026.

Several Korean provinces already have a post-aged demographic with over 20 percent of their residents aged 65 and older. 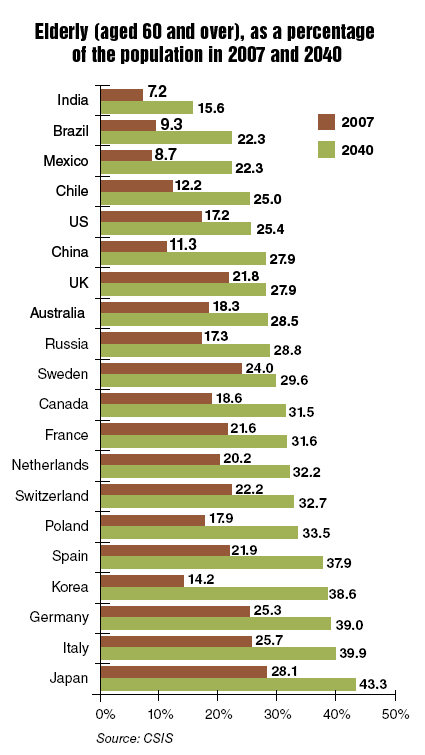 According to the 2010 census, the southwestern province of South Jeolla was home to the greatest share of elderly people with 20.4 percent of residents being 65 and older, followed by Gangwon, South Chungcheong and North Gyeongsang provinces where about 15 to 16 percent of the population is aged.

The southeastern city of Ulsan, though still home to many young people working in the manufacturing sector, is a part of the aging society with the aged comprising 7 percent of the city population in 2010.

The rate at which the nation is aging is alarming. According to the OECD report, it will take only 18 years for the country to turn into an aged society, the second phase toward the post-aged society. The United States is projected to take 71 years to reach the second phase, and France 115 years.

Once Korea enters the stage of an aged society, it will then move to a post-aged society faster. It is expected to take only eight years, compared with up to 40 years in major European countries.

The socio-economic impact of aging will start to be felt around the middle of 2020, according to a welfare policy report from the Korea Institute for Health and Social Affairs.

As the nation’s working-age population will shrink faster and faster with the surge of older population, society will feel a heavier burden from increasing pressure on pension, healthcare and social welfare expenses, the report projects.

The aging trend will also raise the elderly dependency ratio from the second lowest among OECD members in 2000 to the fourth highest by the mid-20th century.

Globally, those people over age 60 amount to about 11 percent of the world population, according to the 2008 U.N. demographic report. And the older population is increasing at the fastest pace ever at 2 percent annually.

In the U.S., the population aged 65 and older has been increasing at a percentage of the total population, and by 2050, one in five persons will be aged 65 or older, according to a demographic report for Congress.

European countries are expected to show a similar trend as about 28 percent of the population in those will be older people in 2050, as a U.N. world population report suggests.

Though it seems to be inevitable for the world to turn grayer countries, Korea seems to be the least prepared country in terms of living standards of the elderly relative to the middle-age population.

Korea ranked 19th overall among 20 OECD member countries in light of the Global Aging Preparedness Index of the Center for Strategies and Global Development.

Regarding the ratio of the income level of the middle-age population to that of the elderly, Korea was placed at the bottom, lower than China and India.

Demographic policy experts note that Korea should brace for challenges brought on by rapid aging. They cite expanding the working-age population as top priority.

The report from the Korea Institute for Health and Social Affairs urges the country to expand its working-age population by making more use of women and elderly work force and accepting more immigrants.

The Center for Strategies and Global Development recommends that Korea should increase pension, strengthen social safety net for the poor elderly, raise birth rate and take in more immigrants.