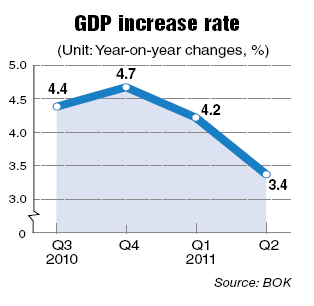 
South Korea’s economic growth slowed down in the second quarter, hurt by lower-than-expected exports and a steep decline in inventory amid intensifying worries over rising prices at home and the sovereign debt crisis in Europe.

Korea’s economy grew 0.8 percent in the April-June period, down from a 1.3 percent expansion in the previous quarter, Bank of Korea data showed Wednesday. According to the advance estimate, the country’s real gross domestic product, the broadest measure of economic performance, went up 3.4 percent during the same period from a year earlier, marking the slowest pace since the third quarter of 2009.

Exports, which make up about half of the country’s GDP, saw growth of 1.8 percent in the second quarter from the previous quarter. The figure marked a noticeable slowdown from January-March when the nation’s exports expanded 3.3 percent quarter-on-quarter.

Kim, however, said the country’s economy would grow at a solid pace in the second half of this year, helped by bigger spending by the government, a factor that will fuel fresh growth into the slump-hit construction sector.

“The inventory level began to plunge from late last year, starting from semiconductor as manufacturers tried to unload their products quickly to grapple with the slowing demand,” said Kim Eui-chan, economist at Daishin Securities.

“Once the economic conditions in Europe and the U.S. recover in the second half of this year, inventory will regain its upward pace.”

One of the most noticeable elements in the second-quarter GDP is private spending, which jumped 1 percent, up from a 0.4 percent gain in the previous quarter. The upward trend of private consumption could lead policymakers to not tighten monetary policy too quickly so as not to dampen demand, even though consumer prices continued to top the upper limit of the BOK’s target band for six months in a row.

The BOK froze the key rate at 3.25 percent in July, following a surprise rate hike in June as economists and analysts said the central bank should accelerate tightening to tame the rising prices.

In the second quarter, construction investment went down 0.4 percent on-quarter and a steep 8.6 percent from a year earlier. The Korean government has taken a slew of policy initiatives to get the moribund real-estate market back on track, but builders struggled hard due to tumbling demand.

In mid-July, BOK revised down the economic growth forecast for 2011 from 4.5 percent to 4.3 percent, reflecting growing uncertainties in key markets such as Europe and the U.S.