A workplace inspector suspected of taking bribes from companies called on a police investigator and tried to bribe him with an envelope of cash only to be caught red-handed early this year.

When police later raided the Seoul branch office of the Employment and Labor Ministry, where the inspector surnamed Park worked, they found a bundle of envelopes packed with banknotes in the desk drawer of one of Park’s colleagues. All seven officials at Park’s division are now being investigated on suspicion of being lavishly entertained and receiving money in exchange for turning a blind eye to labor standards violations at workplaces.

Labor Minister Lee Chae-pil recently asked police to investigate two other officials at the office for taking bribes and other irregularities.

The labor officials’ cases are just a few drops in a wave of corruption that has been engulfing the country this year.

A scandal involving some troubled savings banks, which came to the fore in the wake of the government’s decision to suspend their operations in February, opened a Pandora’s box of corruption permeating Korean society.

Those accused of taking money from the banks in return for helping them keep afloat and avoid punishment for extending illicit loans and other illegalities included a top state auditor, presidential aides, financial regulators, tax officials, local government employees and a reporter. Prime Minister Kim Hwang-sik told journalists in February he received pressure from everywhere to stop the scrutiny into financially struggling savings banks when he was chairman of the Board of Audit and Inspection last year.

“The widespread corruption in the country has almost suffocated me,” Rep. Lee Jae-oh, who currently serves as minister of special affairs, recently wrote on his Twitter page.

Amid growing public anger over the savings banks scandal, other irregularities involving some government ministries were disclosed. Inspectors from the Prime Minister’s Office found that scores of officials from the Ministry of Land, Transport and Maritime Affairs were wined and dined by corporate officials during a workshop on river management on Jeju Island in late March. Some of them were caught being entertained at a hostess bar late at night.

An organization run by former Land Ministry officials collected from engineering companies 276 million won ($258,000) in participation fees, part of which was spent on covering the cost of the workshop. Organizers, however, have kept mum on the unused 157 million won, fuelling suspicion of possible misappropriations.

Ensuing reports revealed that it has become common with many other powerful government agencies to have affiliated institutions and private companies pay for their workshops at resort sites and entertain participating officials.

Some local government chiefs including Seongnam Mayor Lee Jae-myung drew public attention by installing closed-circuit cameras at their offices to dissuade visitors from offering bribes. In a recent poll of local administration heads, 33 of 167 respondents said they had had an experience of someone trying to give them cash at their office.
Anger and lamentation

With a string of corruption cases springing up, President Lee Myung-bak has come forward to lament them and issue warnings against public servants.

He rushed to the office of the Financial Supervisory Service in early May to lambaste its officials for failing to prevent Busan Savings Bank from making illegal loans and committing other irregularities including the withdrawal of deposits by large shareholders and employees shortly before its operation was suspended.

“You helped the major shareholders and managers commit irregularities. Wrongdoings by those with power should never be forgiven,” he said.

In his biweekly radio address on June 13, Lee expressed anger and concern over the corruption scandals rocking the country.

“I myself simply cannot contain my anger over what is happening these days,” he said. “It may be painful and difficult but we should now eradicate corruption and irregularities in a stern way.”

While attending a debate with top government officials days after, Lee leveled his anger again at the corruption and irregularities in officialdom. He quoted retired leaders in various fields, with whom he had had lunch earlier in the day, as saying the whole country seemed corrupt, urging officials to make all-out efforts to root out corruption.

Citing his experience as a construction company CEO, Lee said it had been a long-standing practice for corporate officials to cater to government officials, but it should no longer be accepted.

Political commentators say rampant corruption cases may exacerbate the lame duck status of Lee, who is already seeing his grip on power weakening after the defeat in the April by-elections. His repeated warnings seem partly aimed at tightening the discipline of officialdom throughout the remainder of his five-year presidency that ends in February 2013.

Lee’s lamentation, however, has drawn a skeptical response from the public as his key aides were among those implicated in the scandals, tarnishing his “fair society” campaign designed to boost his image as a leader who cares for low-income families.

Eun Jin-soo, a former commissioner of the Board of Audit and Inspection who worked for Lee’s presidential campaign, was arrested in May on charges of receiving 70 million won from Busan Savings Bank in return for leaking audit information. Kim Hae-soo, a former presidential secretary for political affairs, has been investigated for receiving 80 million won from a lobbyist of the scandal-ridden bank for allegedly helping with its business. 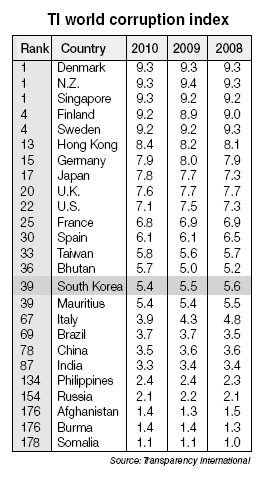 Critics say corruption in Korean society has worsened under the Lee administration as it has focused on performance and accomplishments, neglecting the value of ethics and moral integrity. Some claimed that Lee, who had been aware of civil servants’ irregularities from his experience as a corporate executive, had turned blind eyes to them during the early part of his presidency.

“It is natural for the president to scold Cabinet members as the corruption involving public servants is grave. But Lee’s move seems to come a bit late,” said Kang Won-taek, political science professor at Seoul National University.

“President Lee should show the appearance of taking responsibility as the highest official in charge of state affairs, rather than speaking from a viewpoint of a third person,” said Chang Hoon, politics professor at Chung-Ang University.

Critics also say Lee himself is partly to blame as he has filled most key public posts with his close associates rather than trying to find qualified candidates from a wider pool of personnel.

“The president is starting to scold and wield whips but who has appointed the problematic officials?” said Rep. Park Young-sun, chief policymaker of the main opposition Democratic Party.

In a survey of 1,000 businessmen conducted by the Korea Administration Research Institute last year, most respondents said corruption involving civil servants was at its worst level since 2000. More than 86 percent replied corruption among senior officials at central government agencies was grave.

To the further embarrassment of Lee, a poll of 2,019 citizens, conducted by the office of the minister for special affairs early this year, showed that only 3.4 percent cited Cheong Wa Dae as the most trusted institution in the country, compared to 22.3 percent for academia, 20.6 percent for news media, 15.6 percent for large companies and 8.1 percent for the judiciary.

Korea stood at 39th, tied with Mauritius and behind Bhutan, in Transparency International’s 2010 Corruption Perceptions Index list of 178 countries, scoring 5.4 on a scale of zero to 10, with 10 indicating lowest levels of corruption. Its score decreased from 5.6 in 2008 and 5.5 in 2009. 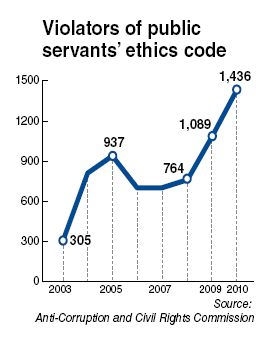 According to figures from the Anti-Corruption and Civil Rights Commission, the number of violators of the public servants’ ethics code has continued to increase under the Lee administration from 764 in 2008 to 1,089 in 2009 and 1,436 in 2010. To the contrary, the ratio of violators punished for their wrongdoings decreased from 59 percent in 2006 to 38.7 percent in 2008 and 33.6 percent in 2009 before rising back to 50.3 percent last year amid worries over lax discipline.

In the aftermath of the ire expressed by Lee, officialdom has kept low-key.

Government officials have avoided playing golf and having meals with company officials. Land Minister Kwon Do-yeop convened all senior ministry officials last month to instruct them to pay for their own meals and avoid playing golf.

But experts note that a simple anticorruption drive may not be sufficient to root out corruption, suggesting more concrete and practical measures. An official at an economic ministry, who wished not to be identified, said officialdom is accustomed to keeping low-key during an anticorruption campaign in the closing days of an administration.

“Some say the current mood will be ended with the Lee government being replaced by a new administration,” he said.

Park Eui-joon, head of an economic research institute, proposed changing the decision-making system at financial and other regulatory agencies to avoid too much authority being concentrated in a certain person and improving the public notice system to allow citizens to have detailed knowledge of what government agencies are doing with taxpayers’ money. Seongnam Mayor Lee said authorities given to local administration chiefs were “too big.”

Park also suggested enacting a law to create conditions under which lobbying activities can be done legally and transparently.

“Lobbying in the shadow provides the room for corruptive connections,” he said. “Now is the time to set the legal framework for lobbying activities.”

The law on lobbying, which would allow ordinary citizens and civic groups to employ competent lobbyists at market prices, would also do away with the long-running practice of public servants giving favors to retired colleagues. The practice, known as “jeongwanyeu,” has been helping foster collusive links between government agencies and businesses, hampering efforts to root out corruption, critics say.

It came under the spotlight again recently as some former tax officials and financial regulators were investigated for taking bribes from companies or banks they had once been tasked with supervising.

Former FSS officials took the post of full-time auditor at 45 of 424 financial companies as of the end of last year. To avoid an article of the Public Service Ethics Act that prevents FSS officials from being employed by companies related to the work they handled for three years before retirement, many officials at the agency were found to have opted to work at personnel, general affairs and consumer protection bureaus.

In his radio address, President Lee vowed to toughen ethics regulations for public officials, noting the practice is rampant not only in financial supervisory organizations but also in other sectors ranging from the judiciary, tax office and national defense to the civil service.

“Without eliminating such practices, however, we will not be able to become a leading, advanced economy,” he said.

“The public sees the corruption of elected public officials and high-ranking government officials as most problematic. Now making society fairer should come ahead of making the country richer.”