Wearing a headscarf worn by some Muslim women in Turkey, Yucasu’s eyes light up when she talks about her heartthrob. She became Song’s fan some five years ago as did thousands of Turks when the Korean period drama “Jumong” was shown on TRT 1, a state broadcaster.

Songdaslarim Turkey Fan Club, primarily an online community of more than 1,000 Song Il-gook fans, seldom holds offline meetings as its members are spread throughout Turkey. On June 24, six of the core members had gathered at Istanbul Sapphire, the tallest building in Turkey at 261 meters, for a rare offline meeting.

“He is friendly, looks warm, like someone you’ve known for a long time,” enthuses Hulya Mermercan, mother of an 11-year-old boy, when asked what she finds attractive about Song. She has been a fan for five years and she says her husband is supportive of her enthusiasm for Song. “He has Song on his cellphone screen now,” she says with a laugh.

“He is helping people around the world. He is a Catholic and I respect his lifestyle,” says Papatya Toyemfi, the fan club president. She will be in Seoul in September for Song’s fan club’s celebration of the actor’s birthday, something she is very excited about. “More than 1,000 fans from around the world have signed up to attend the birthday bash. I am sure he’ll be surprised,” says Toyemfi. Toyemfi will be bringing to Seoul a T-shirt she designed as a present.

For the Turkish fans of Song, the actor opened their eyes to Korea. “I didn’t know about Korea before Song but now I want to learn more about Korea and research about other things,” she says.

In fact, Korean films and dramas have acted as a gateway to Korea in Turkey. For Ozlem Yucel, 37, an advertising executive who is also a popular travel blogger, watching “My Sassy Girl” on the Internet six months ago has been life-changing in many ways.

One Korean film led to another, and Yucel soon found herself a fan of films and dramas from Korea. Her interest has led her to eat in the few Korean restaurants in Istanbul.

More importantly, she is planning a two-week trip to Korea in September, something she had never considered before watching her first Korean film, quite by accident. “I have never thought of going to Korea up until six months ago. It would not have made it to the list of my next 50 travels either. Now, it’s my utmost priority to visit there as soon as possible,” she says.

Korean films and dramas offer a unique window into Korean culture and lifestyle, Yucel observes. “Korean dramas have solid storyline. But the details are very surprising, too,” she says, noting that dramas portray details of everyday life in Korea that she finds very intriguing.

Along the way, Yucel has picked up a few common Korean expressions. “I use Korean words like ‘aigu,’ ‘oetteokhae,’ and ‘aja aja’ even if nobody understands them,” she says.

“I am trying to memorize a Korean song to sing in a noraebang,” she adds.

Love Korea Community, formed in 2009, boasts a membership that ranges in age from high school students to those in their 50s.

The group’s president Yeshim Atish first came into contact with things Korean when she began work at Gaya Restaurant, a Korean restaurant near Taksim Square. “I learned Korean through books and watched Korean dramas during breaks,” says Atish. “I would also ask customers if I was pronouncing words correctly,” she recalls.

The 20-year-old who majors in Chinese language at a university says that it is more important to learn about the culture than to just “love an actor.” At the Love Korea Community’s weekly meetings, various aspects of Korean culture are introduced. The leaders of the group scour the Internet for information and share the information about specific topics. The group also offers free Korean-language lessons for its members. 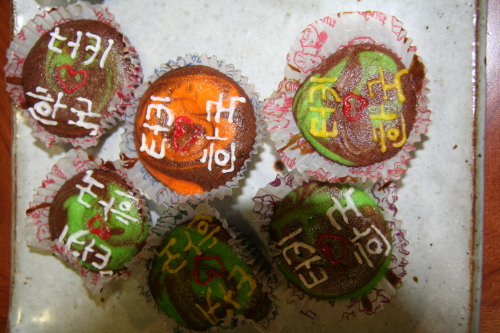 On June 25, the owner of Gaya Restaurant, a 20-year-resident of Turkey, is demonstrating making diced radish kimchi and stuffed cucumber kimchi with two Turkish assistants. The crowd of about 50 ― smaller than usual because school holidays have started and college students have returned to their hometowns ― is busy taking notes on the cellphones, taking pictures or recording the demonstration. Some mothers have accompanied their daughters to the meeting. The atmosphere is congenial, with Korean words such as “imo,” or auntie, and “ajeossi,” or uncle, flying about the room.

There are many teenage fans of K-pop at the meeting.

Selvi Yazki, 20, who would like to see more exchange student programs between Turkey and Korea, said she wants to see K-pop CDs being sold in Turkey, if not concerts, as she is forced to make illegal downloads to get the latest music from SHINee.

Iren Akgun, 16, a fan of Super Junior, said the fan group is planning a flash mob Korean dance to urge the Korean idol group to perform in Turkey. “We got the idea from Paris,” she said. French fans held a flash mob urging SM Town to hold an additional concert in Paris after the tickets for the first concert were sold out within minutes of going on sale.

The Song Il-gook fan club is also very eager to have Song visit Turkey as well. He has already been to Malaysia, Kazakhstan, and Iranian and Turkish fans believe the time is ripe for him to visit them, they note. “He has so many fans here who really want to meet him in person. We could even arrange a media blitz for him,” says Hulya Kumbul who works at the KDS Media Group.