Oh having another bout with city council over waterway

Oh initiated what he termed the “Seohae (West Sea) Waterway Project” as part of his campaign pledges for the 2006 mayoral election, saying it would bring in a larger number of tourists from Japan and China by enabling large cruise ships to anchor at the heart of the capital.

The 15km waterway to be created along the Han River is designed to connect Yeouido, a financial hub in Seoul, to the 18km canal being constructed by the government between Incheon and Gimpo. The canal is scheduled for completion in October. 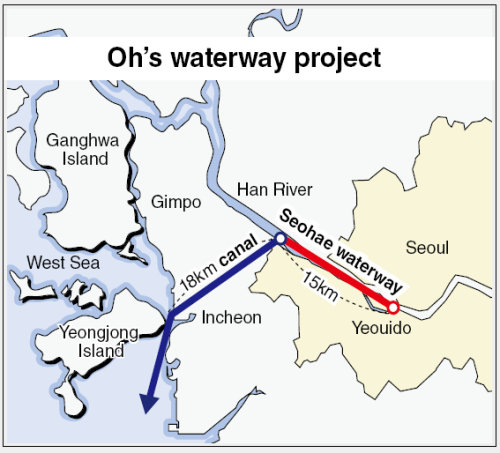 In a news conference on Jeju Island earlier this month, Oh denounced the city council for blocking his pet project. “If the city council continues objecting to it, I will draw money out of the state coffers even through direct negotiations with President Lee Myung-bak,” he said.

His sea trip from Incheon to the southern island, accompanied by a large group of journalists, was apparently intended to demonstrate the benefits of the scheme to link Seoul to the West Sea by water.

Late last year, the council dominated by members of the main opposition Democratic Party slashed the whole budget of 75.2 billion won ($69.4 million) Oh had requested for the 2010 work on the waterway project. DP council members claimed the project was part of President Lee’s plan to criss-cross the nation with canals, which is opposed by the public, and the money should be spent on more urgent programs like support for underprivileged people.

Aides to Oh argue the opposition party fears that the waterway project will be another big accomplishment for the mayor, which might help further boost his stature as potential presidential runner like the work to restore the Cheonggye stream served Lee’s presidential bid.

The project was tarnished by recent scrutiny from state auditors that revealed city planners had exaggerated its benefits and underestimated its costs. But Oh showed no sign of turning back. “The Seohae waterway is a project Seoul City must carry out,” he told a city council meeting on June 20, repeatedly asking for support from its members.