As she was about to enter the National Assembly chamber on June 7, Rep. Park Geun-hye, former leader of the Grand National Party, was surrounded by a group of reporters.

Asked to comment on claims that her younger brother had kept dubious ties with the arrested owner of a failed savings bank, Park said flatly: “As he (her brother) made things clear, it’s over.”

She said she believed her brother’s explanation that they were just friends.

In an interpellation session four days earlier, an opposition lawmaker raised suspicions that Park Ji-man, the former GNP head’s younger brother, had been in a close relationship with Shin Sam-kil, former honorary chairman of Samhwa Savings Bank, who was arrested in April for making illegal loans worth tens of billions of won. Rep. Hong Young-pyo of the Democratic Party claimed that Park had a meal with Shin just two hours before Shin was taken by the prosecution. He said Park’s wife, a lawyer, had worked as adviser to the bank for two years until recently.

Hong suggested that he was involved in Shin’s lobbying to politicians and senior government officials for his struggling bank to be taken over by a state-controlled financial group.

Countering the allegations, a GNP legislator quoted Park Ji-man as telling the former GNP leader in a phone call that his relationship with Shin was “nothing more or less than a friendship.” Park also expressed anger at the “groundless” allegations raised against him, saying he had nothing to do with Shin’s lobbying, according to the lawmaker.

Park Ji-man, who had reportedly planned to come forward to express his stance, later decided to make no public comment on the controversy surrounding him.

His elder sister’s terse remarks defending him, which sounded blunt to some people, drew negative responses from opposition lawmakers and the media.

“Many people tilt their heads at Ms. Park Geun-hye’s comment,” said Rep. Kim Jin-pyo, the DP floor leader. “Can an ordinary person call an end (to suspicions against him or her) like that? Or is there any special law applying to Mr. Park Ji-man?” He further said the former GNP leader’s remarks had revealed her “unlimited sense of entitlement” as the daughter of a former president.

Rep. Park Sun-young of the splinter opposition Liberty Forward Party urged Park Ji-man to turn himself over to the prosecution to clear any suspicion against him. The lawmaker also urged the former GNP leader to disclose details to free herself of the controversy, warning it could be a “big stumbling block” for her presidential bid.

The local media, including some major conservative newspapers favorable to the ruling party, also found fault with Park Geun-hye’s remarks.

The Chosun Ilbo, the country’s largest-circulation daily, said in a recent editorial that her brother’s case would be over only when the people called it over. It noted opposition lawmakers were not the only ones who doubted Shin had sought no favor from Park’s brother when he faced investigation.

Her inclination to give terse replies, which has helped build her image as a self-controlled leader, was not appropriate for an issue the public needs to fully know about, the editorial said.

Some political commentators say the allegations against her brother and her way of handling them reveal two weak spots in her second presidential challenge ― her problematic siblings and the impression that she is detached from the public.

They say the main opposition party’s offensive, which appears partly aimed at countering the prosecution’s investigation that it claims is mainly targeting its key members, is threatening to inflict severe damage on her reputation as the strongest presidential hopeful far ahead of her potential rivals in opinion polls.

A DP lawmaker raised additional suspicions that Park Ji-man and Shin had frequently met with two senior presidential secretaries and a top intelligence official at a restaurant in southern Seoul. The three officials immediately rebuffed the allegation made by Rep. Lee Yoon-seok.

DP officials say they have been collecting further information on suspicions surrounding Park Ji-man and his wife Seo Hyang-hee, a senior partner at a Seoul-based law firm.

GNP lawmaker Gong Sung-jin’s younger sister, who is suspected of having received money from Shin for what she claimed was her market research consulting service, recently said she had introduced Park to Shin between 2003 and 2004. The two are the same age and have since become close, with Park reportedly visiting Shin twice after he was arrested.

Lawmakers close to Park Geun-hye have dismissed the opposition party’s claims as politically motivated with a view to dealing a blow to the ruling party’s presidential frontrunner. Rep. Yoon Sang-hyun of the GNP was quoted by Yonhap news agency as saying Park Ji-man has a “great aversion” to being involved in a fight for interests as he has been repeatedly warned against it by his elder sister.

But another GNP lawmaker, speaking on condition of anonymity, expressed concerns that Park Ji-man and his wife might eventually turn out to be connected to Shin “in an undesirable way,” hampering the former party leader’s presidential challenge.

The latest controversy surrounding Park Ji-man has led the local media to cast light again on his bumpy personal story as the only son of the late President Park Chung-hee and the estranged relationship among his siblings.

Park, now 53, was caught using drugs six times during the 10 years since 1989 but was treated leniently. The public has shown sympathy with the tragedies he suffered when he was young. In 1974 when he was 16, his mother was killed by a pro-Pyongyang Korean resident in Japan, who attempted to assassinate President Park during a Liberation Day ceremony in Seoul. His father was assassinated by his intelligence chief in 1979 when he attended the Military Academy. 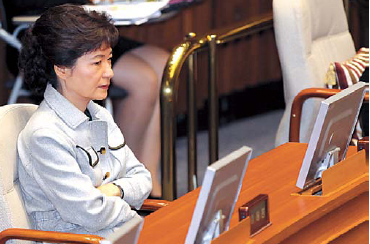 Shortly after he was first caught using drugs, Park Tae-joon, then chairman of POSCO, one of the world’s major steelmakers, recruited him as vice president of a subsidiary company making materials for electronic parts. Park Tae-joon took part in the 1961 military coup led by Park Chung-hee, then Army major general, and was later assigned to the task to build the steel plant in the southeastern port city of Pohang, North Gyeongsang Province.

At the advice of the POSCO chief, Park Ji-man took over the company in 1990 with the money he had borrowed from Kim Woo-joong, then chairman of the now-defunct Daewoo Group.

He changed the name of the company from Samyang Industries to EG Corporation when it was listed on the KOSDAQ stock market. The company’s market capitalization is now estimated at about 200 billion won ($185 million), with more than a quarter of its shares possessed by him.

He married Seo, 16 years his junior, in December 2004, months after their first meeting. At the time, Park Geun-hye, 59, was said to be happy with the marriage of her brother, about whom her aides said she had been very worried.

But the former GNP leader, who has never married herself, was apparently displeased with her younger sister’s marriage four years later with a professor. She and her brother were absent from Park Geun-ryeong’s wedding to Shin Dong-wook, who they suspected had ulterior motives for approaching their sister 14 years older than him.

The two sisters became estranged over the right to operate the Korean Children’s Center, a private foundation set up by their late mother Yuk Young-soo in 1969 to promote child welfare. Park Geun-ryeong, now 57, took over the foundation in 1990 from her elder sister, whom she accused of failing to spot misconduct by its board members. But she was forced to step down in 2004 after corruption scandals involving her own staff broke. Although she raised a suit against a regional education office’s decision to dismiss her, the Supreme Court ruled in May 2009 that her layoff was justified.

Her husband was indicted in January 2010 on libel charges for posting dozens of articles under other people’s names on Park Geun-hye’s home page the previous year, which claimed she had stolen the foundation from her younger sister. He is reportedly considering running in next April’s parliamentary elections, probably the last thing his sister-in-law wants him to do.

Political observers say the former GNP leader needs to prevent problems involving her siblings from further spilling over into the political arena, providing the opposition with ammunition to use against her in the lead-up to the December 2012 presidential election.

What is also needed for her to transform the lead in opinion polls into an election win, they say, is to strengthen efforts to come closer to the public and shake off her image as a detached leader shrouded in mystique.

Shin Yul, politics professor at Myongji University in Seoul, said Park Geun-hye should try to befit the current social trend toward transparency if she is to consolidate and expand her support base.

Former Environment Minister Yoon Yeo-joon, who assisted Park as a campaign strategist during the 2004 parliamentary elections, pointed out that it was time for her to move into the public eye. In a recent interview with a local daily, he said: “Park is superhuman in controlling her emotions, though it limits her ability to draw the masses. Now is the time she should take off her armor and go into the public.”

Noting that the legacy of her father could act as a double-edged sword, some commentators say Park would give further room for the opposition to highlight his oppressive rule rather than his contribution to economic development if she continues to behave as she did in her response to the controversy involving her brother.

Since the opposition’s victory in the April by-elections, some have warned of complacency on her overwhelming lead in opinion polls, with even some of her followers appearing concerned about the possibility of her being caught up with by a unified opposition contender.

In a survey last month, Park received support from more than 42 percent of voters, far above the 10.2 percent for DP leader Sohn Hak-kyu, who is emerging as the opposition’s strongest potential presidential runner. But many pollsters note that the race would turn out neck-and-neck if Sohn gained support from all opposition groups. In a debate with senior journalists last week, Sohn forecast that the margin in his possible duel with Park would be razor-thin. He said the winner could get support from barely 51 percent of voters.

Kim Hyung-joon, political science professor at Myongji University, warned that if Park neglected efforts to widen support beyond her loyal constituency, she would follow in the steps of former GNP presidential candidate Lee Hoi-chang, who lost to liberal rival contenders Kim Dae-jung and Roh Moo-hyun in 1997 and 2002, respectively, despite his lead in prior opinion polls.

Political observers also indicate Park should put forward substantial policies in preparation for thorough scrutiny of her ability as national leader. According to her aides, she has held study meetings, particularly on economic and welfare issues, with a group of experts over the past year. Probably reflecting her deepening expertise, Park raised issues with the government’s policies on insurance, income redistribution and interest rate hikes in recent sessions of the parliamentary Strategy and Finance Committee. DP leader Sohn also sits on the committee.