Korean pop, or K-pop, is driving the Korean Wave abroad and Asian women in their 20s make up the majority of overseas hallyu fans, a survey found on Monday.

The Korea Tourism Organization conducted the online hallyu survey on 12,085 non-Korean visitors from 102 countries to its website (www.visitkorea.or.kr) from May 11 to May 31, to celebrate the 10th anniversary of the website. The survey asked seven questions related to the Korean Wave in eight languages ― English, Japanese, traditional Chinese, simplified Chinese, German, French, Spanish and Russian ― on the site, via e-mail and on social networking services such as Twitter and Facebook. 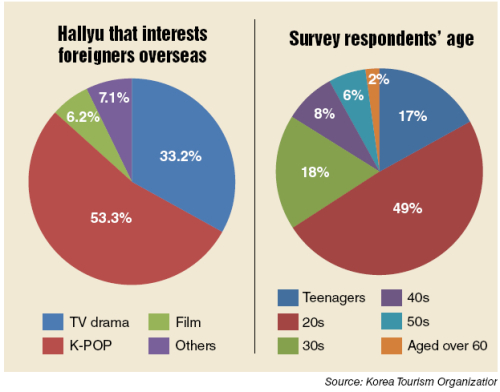 Asked to select a category of hallyu that interests them, 55 percent of respondents, 6,447 people, picked K-pop. This was followed by TV drama with 33 percent, film with 6 percent and others with 7 percent. Others included TV variety shows such as KBS’ “2 Days & 1 Night,” Korean food, shopping and cosmetics.

Asked which hallyu celebrity they wish to travel with in Korea among 30 stars or groups recommended by the KTO, the highest proportion of 13 percent chose the 13-member boyband Super Junior. Five-member band Big Bang came second with 9 percent, followed by JYJ with 7 percent, TVXQ with 5 percent and Girls’ Generation with 4 percent.

Japanese users showed more interest in TV drama than in K-pop and more than 50 percent of Japanese respondents were women in their 40s and 50s. Japanese in their 20s and 30s showed the strongest interest in K-pop.

Among the French speaking respondents, K-pop fans were mostly teenagers or in their 20s, and preferred going to amusement parks or karaoke to experiencing Korea’s traditional culture and history, the KTO said.

Foreign respondents overseas picked Seoul and Jeju Island as the travel destination in Korea that they would like to visit with their hallyu star.