Gucci is said to have complained to Shilla over the lower commission fee and favorable spots the Hotel Shilla affiliate gave to Louis Vuitton. The 10 to 20 percent of commission charge on the French label is lower than the 30 percent Shilla is imposing on most other fashion labels, including Gucci. 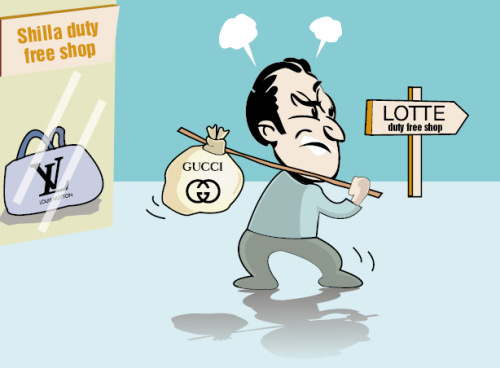 Things turned sour between the two duty free operators when Shilla in November won a contract to launch the high-end French fashion house for the first time inside an airport.

Louis Vuitton sealed a deal with Shilla to open a store at the center of the passenger terminal between Gate 27 and 28, and in a space as large as 595 square meters. Hotel Shilla managed to win approval from the airport to remove about 140 seats and a 55-square-meter bookshop to bring the French label in. Lotte filed a lawsuit against the airport for its alleged preferential treatment toward Shilla but dropped the suit on April 19, paving the way for the opening of a Louis Vuitton store in the airport.

Gucci is said to have requested a lower rate of commission charge to Shilla but was declined.

“High-end fashion labels operating with Shilla all maintain double-digits in revenue except for Gucci, it has been making negative growth. Impact from withdrawal of Gucci is limited,” an official at Shilla Duty Free said. Miu Miu, a shoe label from the Miuccia Prada and jeweler Tiffany & Co will fill the space left by Gucci, he added.