According to the Korea Automobile Manufacturers Association, 75,495 units of city cars ― automobiles with engine displacements of up to 1 liter ― were sold here during the first five months of the year.

Compared to the same period last year, the figure is an increase of 16.4 percent.

In comparison, the overall domestic market including commercial vehicles expanded by 3.6 percent over the same period. 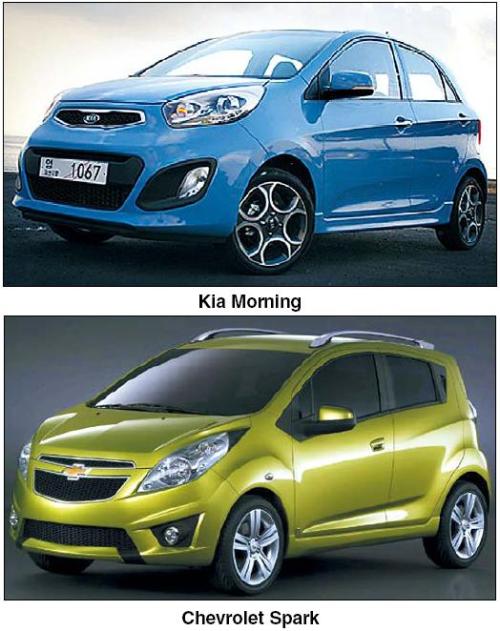 Last year’s figure was the highest on record since city cars were first introduced to the Korean market in 1992. The country’s first city car was the Tico produced by Daewoo Motor, which has since become GM Korea.

Although the Kia Morning trailed the Spark’s increase rate, the vehicle continued to dominate the city car market with 50,842 units being sold here during the Jan.-to-May period.

For both carmakers, the city car sales’ increased at a faster rate than overall sales.

GM Korea’s Jan.-to-May sales increased 15.8 percent compared to the same period last year, while Kia’s sales for the first five months of the year expanded by 12.2 percent over the sale period.

“One of the factors behind the Morning’s sales increase is high fuel prices, and uncertainties about general economic conditions also may have contributed,” a Kia official said.

While existing city car models enjoy unprecedented popularity, the country’s market for such vehicles is expected to receive a further boost later in the year with Kia adding a new mini car to its lineup.

The company, which updated the Morning earlier this year with a full-model change, will launch a mini crossover utility vehicle fitted with the 1-liter engine used in the Morning in August.