The gross domestic product grew 1.3 percent in the January-March period, falling short of the 1.4 percent estimate made in April, the Bank of Korea said Wednesday. Though the strongest performance in three quarters, the lower than expected figure reflects domestic demand making the smallest contribution to quarterly growth in six quarters. 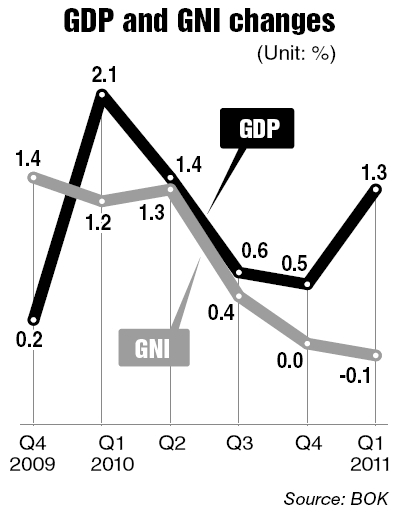 Exports, accounting for about half of the nation’s GDP, grew 4.6 percent for September-December period, exceeding the 3.3 percent expansion forecasted. Consumer spending inched up 0.4 percent in the same period, slightly off the 0.5 percent estimated.

Economists said growth will slow further in the second quarter.

“It is a fact that manufacturing and industrial output decelerated in April and this will be reflected in the GDP output of the second quarter,” Oh Seok-tae, a senior economist at SC First Bank said.

The data arrived ahead of monthly rate review meeting at the BOK this Friday and the review of growth forecast by the Finance Ministry scheduled to take place at the end of this month.

“We’re expecting another freeze of the benchmark interest rate this week. Slowing consumer spending and export would be considered but I think it is in governor Kim Choong-soo’s will to take a super-slow baby steps,” Oh said.

The BOK kept the benchmark interest rate unchanged at three percent at its last meeting on May 13 after hiking it by 0.25 percentage point each in January and March.