Pollutants remain in drainage water from a central Seoul U.S. military base, despite the capital pumping nearly 2,000 tons of contaminated water since 2001, city officials said on Tuesday. 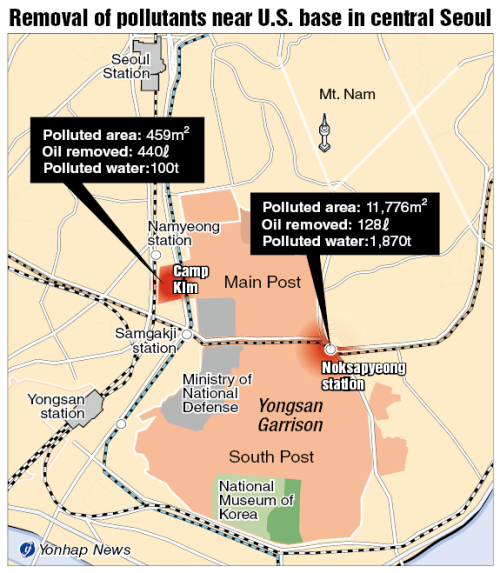 The discovery of pollutants is increasing concerns about waste disposal at U.S. bases, already heightened by concerns of possible Agent Orange contamination at camps in Korea.

According to the Seoul Metropolitan Government, officials are still finding the water polluted with oil and other chemicals in the drainage system flowing from the Yongsan Garrison. However U.S. army officials claim that they finished a massive cleanup in 2006, regarding the areas in question near Noksapyeong Station and Camp Kim.

Separately, the capital pumped some 128 liters of oil floating on the underground water systems, and roughly 1,870 tons of contaminated water since 2001 in the vicinity of Noksapyeong Station and the U.S. Eighth Army base, officials said.

Some 440 liters of oil and 100 tons of water were pumped at a second site outside Camp Kim, which is located opposite the main Yongsan post, since 2008.

There is an estimated 11,776 square meters of oil-polluted land in the area around the military base and Noksapyeong Station, and some 459 square meters of land near Camp Kim as well, city officials said.

“There are benzene, toluene and xylene among other chemicals in the underground water system,” said an official, adding that they believe the pollutants were washed from the U.S. base by rainfall.

The city will devote some 250 million won ($231,300) in cleanup efforts this year, but officials believe oil will still be detected in the drainage system until 2016.

“We need to perform a cleanup operation on the source of the problem within the U.S. army base, but because we do not have free access to the area we are simply pumping out polluted water from the surrounding area,” an official said.

The city was able to recover some 3,766 million won through a suit against the government for the cleanup cost from 2001 to 2008, “We plan to pump polluted water through holes drilled around the U.S. army base,” said a city official, adding that preventing pollutants from entering the Han River was their main focus.

The U.S. Eighth Army declined to comment on the matter.

The findings come amid already escalated tensions between South Korea and the United States Forces Korea over multiple allegations that Agent Orange was buried at U.S. military installations in Korea.

A Korea-U.S. joint probe team is already investigating Camp Carroll in Waegwan, North Gyeongsang Province, for evidence of a burial and its results are expected later this month.