Pyongyang’s official media announcement on Wednesday that Seoul proposed holding three rounds of summit meetings between their leaders have dashed prospects for a summit between President Lee Myung-bak and North Korean leader Kim Jong-il and prolonged the inter-Korean stalemate.

The Lee administration was also likely to face criticism at home for lying to South Koreans over its “principled approach” on the North and for worsening the already worst-ever inter-Korean relations. 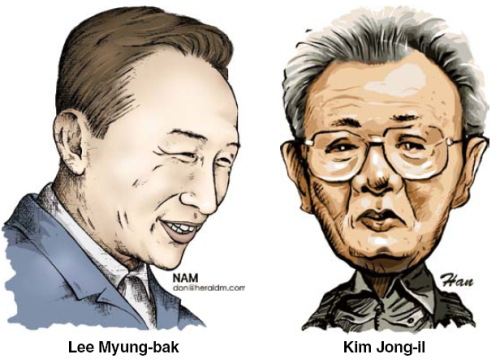 Seoul’s Unification Ministry scrambled to issue a statement in response to the North Korean report that Seoul pleaded for any gesture from the North to appease its people still angry over last year’s attacks via an unofficial communication channel, as it proposed holding the summit talks.

Senior officials from Seoul, including President Lee Myung-bak’s secretary for external strategy Kim Tae-hyo, made secretive contacts with North Korean officials, asking to hold a ministerial-level meeting in late May to prepare for three summit meetings in June, August and March next year, a spokesman of Pyongyang’s National Defense Commission was quoted as saying to Pyongyang’s state-run Korean Central News Agency.

The KCNA also mentioned the names Kim Chun-shik, a senior Unification Ministry official, and Hong Chang-hwa, an official at the National Intelligence Service, in addition to Kim Tae-hyo as those who had the “secret contacts” with the North since May 9.

May 9 is the day President Lee abruptly announced during a joint press conference with German Chancellor Angela Merkel in Berlin that he would invite Kim Jong-il to the world nuclear summit to be held in Seoul next spring if Kim promises to make efforts for denuclearization.

Lee’s spokesperson Kim Hee-jung later said that Seoul has fully explained its “true intentions” regarding the conditional invitation of Kim Jong-il to Pyongyang, but the unnamed NDC spokesman claimed this was a “downright lie.”

South Korean news reports said Seoul made the explanation to North Korean officials in Beijing on May 14.

The NDC spokesman claimed that Seoul began to plead in April for a behind-the-scenes meeting to prepare for a summit, vowing not to talk about the sinking of the Cheonan or the attack on Yeonpyeong Island again.

But the officials such as Kim Tae-hyo who made the “contacts” from May 9 reversed the earlier position and sought to get an “apology” from the North, the spokesman said.

“When our side made it clear that we cannot make an apology for an incident that has nothing to do with us and a just measure for self-defense, (the Seoul officials) begged for our concession, suggesting a compromise (statement) that appears as an apology in the South even if it is not perceived as an apology in the North,” the spokesman said, according to the KCNA.

The only thing close to an apology that the North has made so far was a statement expressing “regret” over the intrusion of its submarine into South Korean waters in 1996.

The South has been seeking to attain something on the lines of the 1996 statement, which can be viewed as an apology for the naval ship sinking and shelling of a border island.

Ever since international investigators concluded that the North torpedoed the Cheonan in March last year, killing 46 South Korean seamen, Seoul has maintained that serious dialogue with Pyongyang can begin only after the North apologizes for the attack.

“The officials (from Seoul) said they have already set schedules for the inter-Korean summit,” the unnamed North Korean official went on in the KCNA report.

They proposed holding a ministerial-level meeting in late May to prepare for three summit meetings in June, August and March next year, once the two issues (the Cheonan and Yeonpyeong Island) are settled, according to the official.

The KCNA report, which came just two days after the North threatened to cut off a military hotline with South Korea, appears to indicate the communist state’s dwindling patience over a series of Seoul’s actions.

The NDC spokesman claimed that South Korean officials even “offered an envelope with money in it” as it urged the North to “at least express regret” over the two incidents that killed 50 South Koreans and meet again in Malaysia to discuss the prospects for a summit.

If the North’s claim turns out to be true, the Lee government is expected to face criticism from both right wingers and pro-North Korean left wingers here for deceiving the people.

Mentioning that the South requested for confidentiality over the secret contacts, the NDC official accused Seoul of “fabricating the content of the meeting in Beijing and disclosing it to the press.”

On Monday, the defense commission of Pyongyang had said it will suspend the eastern border communication channel and warned of “physical actions” over Seoul’s propaganda campaign near their heavily fortified border.