Chung Jang-hwan, CEO of business social network website Linknow, had never dreamed of being hired through such an online service before.

Formerly employed at L&S Investment and AT&T, Chung posted his resume on the Korean Linknow site without pinning much hope on the move.

However, he was called in for an interview by Linknow founder Shin Dong-ho, who liked his resume and seated Chung as the company’s CEO in January.

“I never thought a service like Linknow could take off in a country where people had been in favor of closed networks in the past,” he said.

The chief executive is now among the many to be recruited through the social networking site, which is mainly used for business purposes. 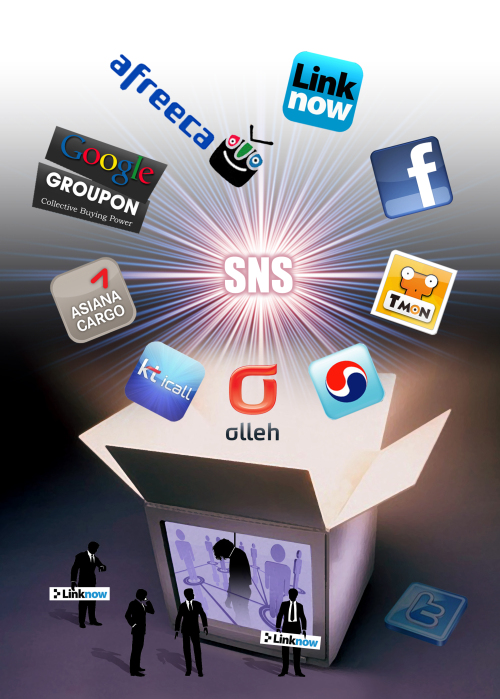 Currently, about 1,600 people in human resource teams at a variety of companies and 700 headhunters are using the service for recruitment and at least 30 people are hired each month, Chung said. Large firms like Samsung, LG, Oracle, NHN and CJ are just some of the companies hiring employees online, he added.

Offering similar services to the U.S.-based firm LinkedIn, Linknow was created in July 2007 with the goal of constructing a business network and increasing business productivity for Korean firms. The company currently has 12 employees and 150,000 registered users.

The ability to finding hiring opportunities, however, is just one service social networking services are now offering users. Social networks are now used as a tool for broadcasting, dating and shopping, as well as communication.

There are now 3.6 million Facebook users and 3.8 million Twitter users in Korea with the number of smartphone owners considerably more than 10 million as of this year, according to industry sources.

Olleh On Air enables would-be broadcasters to log on through their smartphones and computers to stream live content online. Or they can pre-record content ― of up to one hour for regular service users and four hours for premium service users ― to broadcast later, said KT officials.

The link and the title of the broadcast are automatically sent to others through the social networking services, they said.

“Anyone could easily present real-time broadcasts with a PC or smartphone through Olleh On Air and others can also watch the content anywhere and anytime,” said a KT official.

Those meeting their partner through online chatting rooms may have been labeled tech-savvy, or maybe even romantic in the past. But nowadays social dating is the trendy move with more than 10 social dating services available for singles. The services are accessible on smartphones.

Two people analyzed to be the best fit are “matched” every day at noon, with one of the two being notified of suggested pairing. If the selected person expresses interest, they become friends on Facebook and can send messages to each other.

The service is provided on Facebook and as a mobile application for the iPhone.

Social networking services have already taken position as a communication tool at many large firms such as Samsung, KT, SK Telecom and LG.

“Issues that require immediate attention, such as those which need to be improved, developed or changed, are debated by employees through a SNS site dubbed yammer, which is a tool used inside the company,” said a KT official.

Although SNS offers a wider variety of potential services and merits, they also have their downsides.

Song Ji-seon, a 30-year-old sports channel host, leapt to her death from her apartment building last week following the spread of messages on SNS sites that lashed out at Song for making false claims about her relationship with baseball pitcher Lim Tae-hoon.

Posts on sites such as Cyworld voiced strong negative opinions on Song after Lim denied having a relationship with the TV celebrity.

The event led many to believe that Song was a victim of malicious cyber bullying, initiating debates on the role of SNS.

“It seems like the thought of looking after others and showing good faith have all disappeared on SNS,” said a 31-year-old Seoulite who did not wished to be identified. “If people who wrote those negative words online don’t feel any kind of guilt, it could mean that anybody could become the next person in line for cyber bullying.”