Following Seoul’s hosting of the landmark Group of 20 summit talks last year, the National Assembly is to lead a meeting of G20 parliamentary speakers this week. 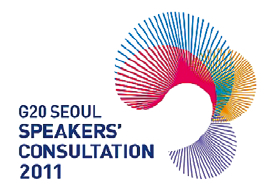 The G20 Seoul Speakers’ Consultation will take place in the assembly’s main Rotunda Hall from Wednesday to Friday, attended by representatives of 21 countries, the European Union and the Inter-Parliamentary Parliamentary Union.

The event will be the global premier of the forum for parliamentary speakers from G20 states, with a goal of following up on the results of the summit.

Select non-G20 states ― Algeria, Ethiopia, Guinea, Singapore, and Spain ― have also been invited to represent their regional communities, along with the EU and the IPU.

The overall objective of the Seoul Speakers’ Consultation is to establish a foundation for shared growth through inter-parliamentary exchanges and cooperation.

Leading parliamentarians are to share their views on domestic legislative policies, as well as discuss parliamentary level strategies on important global issues such as poverty, food shortages, climate change and terrorism.

“The speakers’ consultation will reinforce the bonds formed during the latest summit by providing the legal ground on which to realize the agreed-upon subjects,” said Kwon Oh-eul, parliamentary secretary-general and preparatory committee chairman.

“Our assembly as host of this conference seeks to play a pivotal role in raising the awareness of the importance of parliaments in the international community.”

A special session has been set aside to discuss the international coordination strategy for global security, in response to threatening factors such as terrorist attacks and natural disasters.

The extra session was created in consideration of possible terrorist attacks following the death of al-Qaida leader Osama bin Laden, as well as the catastrophic earthquake and tsunami which struck Japan in March, and the subsequent nuclear crisis.

In a step toward the implementation of the topics of each session, Park will try to get participants to adopt a joint statement during this week’s meeting.

This year’s consultation is the second in its series, following the initial one in Ottawa in September under the lead of the Canadian Senate.

There, Park suggested Seoul as the next venue and also contended that the speakers’ consultation should be held on a regular basis in the future.

“There was a consensus among participating countries that Korea, as the successful host of the G20 summit, should chair the meeting,” he said.

Canada was a G20 summit host in the previous year.

Though France, this year’s host, refrained from holding the speakers’ consultation, a number of other G20 states have volunteered for the opportunity, officials said.

“We will try during this week’s meeting to confirm this consultation as a yearly one, to be hosted by the G20 summit host, if possible,” said Park.

“Then the yearly consultation will be more than a simple regular gathering but more of an active inter-parliamentary communication channel.”

Though Korea hosted the annual IPU convention in 1984 and 1997, this year’s speakers’ consultation is the single largest international event to be held in the Korean parliament.

“The event will not only promote Korea’s status in the international community, but also improve the public view of the National Assembly and its members,” the speaker said.

“The Speakers’ Consultation is expected to amplify the political, social and economic effects born by the G20 summit.”

The event, which is to cost a total of 1.6 billion won ($1.47 million), is also expected to bring long-term promotional effects to Korea, according to officials.

In between and after the official sessions, the speakers and delegates are to be taken on cultural and industrial tours.

Also, a special culture program has been arranged for the spouses and family members of visiting speakers, officials said.

In a bid to remind participants of the image of Korea as a country which takes harmony and balance seriously, the official emblem of the Seoul consultation was also patterned on “taeguk,” a traditional yin-yang mark.

Local experts in traditional culture, food, clothes and other fields worked as advisors for the success of the nation’s first meeting of G20 speakers.

Further details of the G20 Seoul Speakers’ Consulation are available on its official website (http://seoulspeakers.assembly.go.kr/eng).