What is MR-HIFU therapy?

High-intensity focused ultrasound therapy could be compared to setting a fire by focusing sunrays with a magnifying glass. Sunrays are warm, but unable to induce fire by themselves. However, once they are concentrated on a very small spot, the heat generated becomes large enough to start a fire.

Likewise, an ultrasound, which employs very weak energy, typically does no harm to tissue, but if it is focused into a small point, it can elevate the temperature to burn tissues. HIFU therapy makes use of this physical phenomenon to treat diseased tissues such as benign or malignant tumors. Recently, HIFU therapy has been combined with the MRI, currently the most advanced imaging technique. The MR-HIFU’s strength is that ultrasound heating can be monitored with a high degree of reliability, thus guaranteeing precise as well as safe treatment. 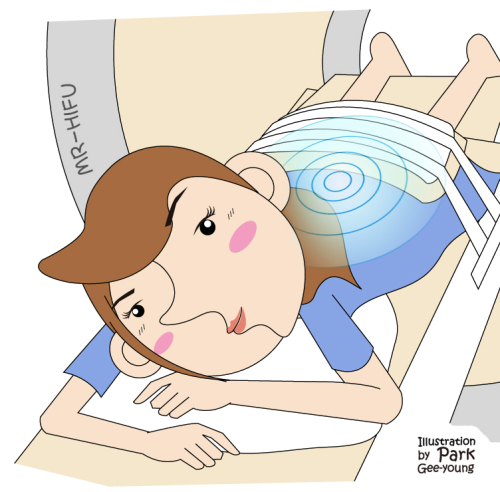 MR-HIFU therapy is most actively used in the treatment of symptomatic uterine fibroids (a.k.a. leiomyoma or myoma), which is the most common benign tumor in women. Common symptoms of uterine fibroids include excessive menstrual bleeding, severe menstrual clamping or urinary frequency. It infrequently causes anemia, back pain or even infertility. MR-HIFU manages such symptoms by means of burning the causative fibroid tissue in a totally noninvasive manner; the treatment can be done by just contacting the skin of the lower abdomen area on the ultrasound window.

As compared with surgery, MR-HIFU therapy is featured by “three absences”; absence of scarring, absence of anesthesia and absence of admission. Treatment typically takes 2-3 hours and is performed on an outpatient basis. Although there might be pain similar to menstrual cramps at the moment of tissue burning, it can easily be controlled with medication. The advantages of MR-HIFU therapy over uterine fibroid embolization ― another non-surgical alternative ― are no exposure to ionizing radiation and much less pain following the treatment.

MR-HIFU therapy does not have long-term follow-up data due to its short history. However, a recent report stated that 80-90 percent of patients who have undergone this treatment experienced improvement in their condition, and the size of fibroids was reduced to 30-40 percent (or less) of the original volume after 4 years of follow-up.

Initially, MR-HIFU therapy was not allowed for women who wanted to have children in future, mostly due to uncertainty about the effects on fertility. However, many reports of successful pregnancy and delivery following this treatment led administrations in the United States and Europe to change their policies to permit MR-HIFU therapy for them. Although no large-series scientific analysis is available, the consensus among researchers is that MR-HIFU therapy has no or minimal influence on future pregnancy and delivery.

Currently, clinical MR-HIFU therapy is mainly applied for the treatment of uterine fibroids. However, applications to other diseases such as metastatic bone tumor, cancers in the breast, prostate, pancreas or liver are being actively investigated via pre-clinical and clinical trials. Thus, it is evident that the indication of MR-HIFU therapy will be expanded further to a wide spectrum of diseases in the very near future.
By Kim Young-sun, M.D.

The author is a doctor at the department of radiology and imaging science of Samsung Medical Center. ― Ed.