Denim gets the hanji treatment

The following is the second in a series of articles on the contemporizing of Korean culture -- Ed.


In the fickle world of fashion, where trends come and go every few months and new items fill the store racks virtually every week, a designer who devotes years to a singular vision is a rarity.

Han Song whose eponymous Han Song Jeans made with “hanji,” or mulberry paper, and natural dye will be launched at Denym Bars at Hyundai Department Stores in Seoul this week, is one such rare find.
For about eight years, the designer, who started out as a couturier with his brand Han Song Couture, sought to find an eco-friendly alternative to denim. In the process, the creative director of TROA, quite inadvertently, brought together Korea’s highly-prized hanji and centuries-old natural dyeing tradition, reinterpreting denim, a Western icon, in a fresh way.

It was in 2003, during an interview with Elisabeth Paille, an influential French fashion journalist, after his Paris Haute Couture show that he recognized the importance of fabric, of having “something new to say.”

It was also around this time that he became aware of eco-conscious products. He learned from a newspaper clipping sent by his friend that the pesticide used in growing cotton plants and the chemicals that manufacturers rely on to produce the wash effects and “whiskers” in denim are significant pollutants.

“I had always been interested in working with new fabrics so I immediately set about developing an eco-friendly fabric,” says Song. Little did he know back then that it would take him eight years to create a fabric made by finely shredding and twisting hanji made with the inner bark of mulberry trees into hanji yarn. Hanji yarn is a sustainable product because only the branches of the trees are used.

In fact, Song several times came close to giving up the quest for a new eco-friendly fabric. “At one point when I was seriously thinking about giving up, I happened to watch 'An Inconvenient Truth' on a plane to New York. And I realized I couldn’t give up,” he recalls.

It took years of trial-and-error to find the right combination of hanji yarn, Tencel, a pulp fiber, and Lycra that satisfied him.

“Hanji is closest to cotton so it works best. At first I tried using hemp, a known eco-friendly fabric, but it wasn’t as soft. More importantly, hanji takes natural dye in a way that results in a very special effect, feel,” Song explains. “It just worked.”

Han Song Jeans come in a palette of natural colors that are gentle on the eyes and skin. Using elements found in nature, such as indigo plants, charcoal, ink and flowers, artisans in a small village in southern Korea dye the fabric by hand in a slow, labor-intensive traditional natural dyeing process handed down generations.

“I use natural dyeing because it does not harm the environment. It took a long time to come up with a formula and technique to prevent the colors from bleeding and rubbing off on lighter fabrics,” Song says.

Isn’t natural dyeing limiting in the kinds of colors that can be created, surely a significant restriction for a fashion designer? “I am not really interested in a full spectrum of colors. It is more about what effect the dyeing process gives the fabric. The natural dyeing process really changes the fabric. With one fabric many different feels are created, depending on the dyeing technique used,” Song explains.

The price of Han Song Jeans puts it in the highly competitive premium denim category already saturated with global brands. For a small Korean brand, it would be a gargantuan challenge to compete in that market.

“From the beginning, I didn’t think I was competing with other denim brands because it is not your traditional denim,” Song says.

“They are comfortable pants that look a bit like jeans. They are right for now because of the luxurious look and the comfortable feel. Han Song Jeans are not fighting for jeans customers,” Song says. 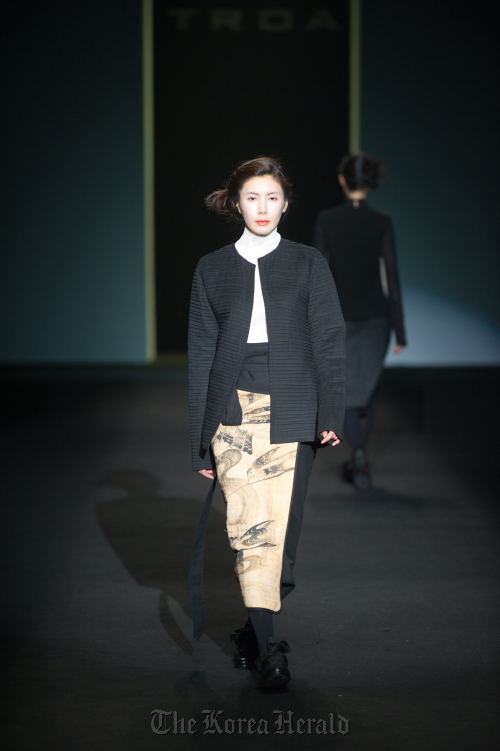 In fact, in the first week of selling at a pop-up store at the COEX branch of Hyundai Department Store earlier this month, it was those in the 40-years and up age group that snapped up the pants.

“They’re able to understand the color better. They also appreciate the comfort of the lighter ‘denim.’ That is the age group I wanted to target because that is the market I relate to better as a couture designer and more recently as the creative director of TROA,” he says.

In 2008 Song led the brand renewal at TROA, a brand founded nearly 50 years ago by his mother, Troa Cho, a doyenne of the Korean fashion industry.

Song’s use of hanji fabric and natural dyeing is not limited to jeans.

Almost every piece in the TROA collection, which showed April 1 during Seoul Fashion Week, incorporated hanji yarn. Silk shirts were the only exception.

The collection inspired by “podaegi,” or traditional cloth wrap used to carry babies on mothers’ backs, also featured “munjado,” a type of traditional pictograph, taking ideas from Korean cultural heritage and transforming them into classical looks.

When designers are inspired by their traditional culture, there is always the danger of falling into the ethnic design trap. However, Song’s latest offering is a classic collection whose silhouette, fabric and colors together create an avant-garde feel.

This mood was not lost on buyers from Layers, a prestigious select shop in London, who visited Song’s showroom after the Seoul Collection show and described the collection as avant-garde.

“My goal was to create an avant-garde collection and I was happy to have it confirmed. It is very important to hear what buyers have to say because fashion is not just about a vision, it is also a business,” Song says.

For Song, hanji fabric is a crucial element of TROA’s global strategy.

“Seven, eight years ago, Japan was known for producing the best cotton. In the near future, when I return to Paris, I want to hear ‘Korea has a great new fabric,’” says Song, who plans to show a collection with hanji fabric in Paris as early as next year.