The share prices of Hyundai Motor Group’s three automotive companies have reached new highs on an almost daily basis in recent months, but experts say there is still room to grow.

Share prices of the “Hyundai Three” ― Hyundai Motor Co., Kia Motors Corp. and Hyundai Mobis Co. ― have risen at an unprecedented rate over the past year.

That of the parts maker Hyundai Mobis also more than doubled over the same period.

Analysts say that the three companies share prices have been buoyed by improving performance as well as expectations for good first quarter figures. In addition, local securities firms also rate their shares to be still undervalued despite the recent spike, further boosting investors’ interests in the stocks.

For Hyundai, which will publish first quarter figures on Thursday, local securities firms have high expectations with a number of firms projecting significant improvements.

Projections for Kia, whose annual net profits broke the 2 trillion won mark for the first time last year, are also good with some in the industry forecasting that its first quarter figures are likely to be at record highs citing significant improvements in sales.

According to Kia, its global sales for the first quarter of the year came in at a new quarterly record of over 565,000 units, up 20.2 percent compared to the same period last year. 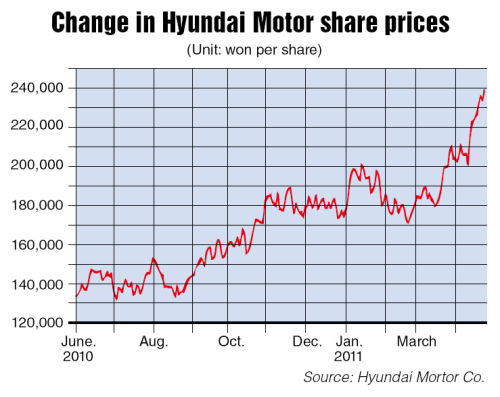 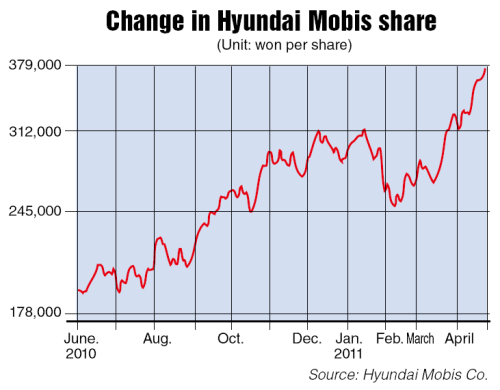 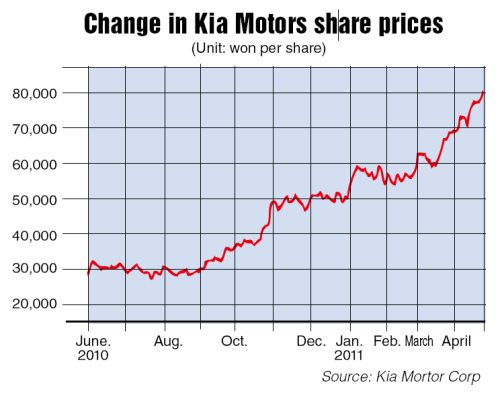 Kia also faired well in the world’s largest automotive market, China, during the first three months of the year with sales rising by 12 percent from a year ago.

With much of its revenues generated by sales to Hyundai and Kia, the outlook for Hyundai Mobis in the near future also looks favorable.

According to Hyundai Mobis, about 90 percent of its sales are to the two affiliated carmakers.

More recently, the series of disasters that struck Japan last month threw the country’s automotive industry into disarray, which is considered by many in the industry to be beneficial to Hyundai and Kia.

According to most recent estimates from Toyota, production is unlikely to resume at normal levels until November.

While the full impact of such developments remains unseen, an annual output reduction of as much as 2 million units has been being forecast by analysts.

As such, market and auto industry analysts are seeing the Japanese industry’s woes as an opening for Hyundai and Kia, which rely much less on Japanese parts than some of their competitors.

In a recent report, the U.S.-based market research firm Frost and Sullivan projected that the difficulties experienced by Japanese carmakers and those that rely heavily on Japanese parts will lead to gains for those with little reliance on Japan’s auto parts makers including Hyundai.