Sales were at 37 trillion won, up 6.8 percent year-on-year, according to Samsung during an earnings guidance designed to provide performance forecasts.

Actual figures for the quarterly earnings will be announced later this month.

Falling prices of liquid crystal display panels and weaker-than-expected sales of tablet PCs were the main the cause for the decline, analysts said.

“LCD panels suffered from a lack of demand and nascent prices,” said Kang Jung-won, an analyst with Daishin Securities.

LCD prices have been steadily falling since last year, with panels going into 37-inch TVs falling to below $200 in April, according to DisplaySearch, a market research firm. The price of full-HD LCD panels for 46-inch TVs also fell, shedding $15 in just three months.

The world’s second-largest phone-maker sold about 1 million Galaxy Tabs worldwide, which was only about half of its initial forecasts.

Samsung has subsequantly revised its yearly sales target downward to 6-7 million from 10 million. The company is now said to be fretting over tablet stockpiles. Samsung in February unveiled a new tablet in efforts to compete with Apple’s iPad lineup.

TV sales were expected to continue taking a toll on Samsung’s performance on account of weak demand and falling panel prices. The company’s LCD division, in particular, was forecast to post about 154 billion won of quarterly deficit, experts said.

Global TV sales were expected to stay almost unchanged this year at $119 billion, up just slightly from $118 billion last year despite efforts from TV-makers to launch higher-end products such as 3-D and smart TVs, according to Daewoo Securities estimates. 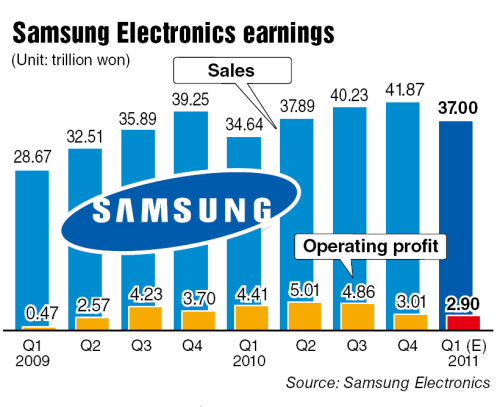 “The dynamic random access memory chips market is robust, and global NAND flash memory markets also will see better-than-expected demand, both of which will serve as factors to help Samsung achieve more than 4 trillion won of revenue for the second quarter,” Kang said.

HIS iSuppli said global sales of NAND flash memory will hit a record this year on burgeoning demand for mobile devices and higher prices.

The March 11 earthquake in Japan was expected to further boost Samsung as prices of NAND memory and displays are seen to be rising in the face of disrupted supplies at Japanese suppliers.

Last year, Samsung Electronics had posted record-high amount of sales and operating profit of 154.6 trillion won and 17.3 trillion won, respectively, after it successfully launched smart phones and tablet PCs to follow the lead taken by Apple, one of its biggest rival and collaborator.

Analysts expect the second quarter operating profit to reach as high as 4 trillion won, while sales rise to 40 trillion won.