Excluding volatile oil and food costs, core inflation prices grew 3.3 percent from a year earlier, up from the 3.1 percent in the previous month.

Prices of oil, and agricultural, livestock and fishery products rose 15.3 percent and 14.9 percent, respectively, from a year earlier.

Experts said the significant increase in rent prices, which rose 3.2 percent from the previous month and by the biggest clip in eight years, could be a signal that further spikes could come in the market.

The price of goods manufactured using oil also rose by a large margin of 15.3 percent, causing a cross-board increase of 5.9 percent in manufactured goods. 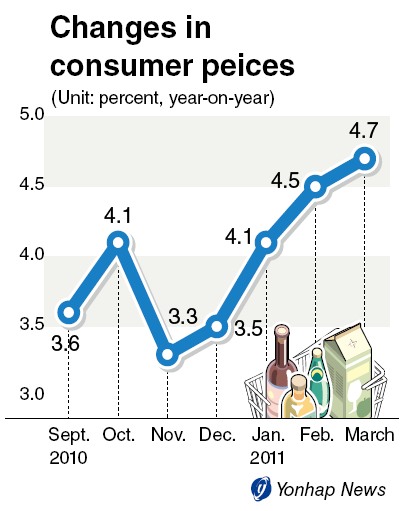 “The main cause was oil,” said Chung Jin-young, a senior researcher at Samsung Economic Research Institute. “Crude oil costs surged in January, and that is being factored in now.”

Crude oil supplies were hit by the political unrest caused by a string of pro-democracy movements in North Africa and the Middle East where most of the world’s oil supply comes from.

For South Korea, the impact could be bigger, as it depends almost entirely on imports for energy.

The government, however, appeared positive on inflationary pressure, saying that consumer prices would stabilize by April.

Experts pointed out that the current price levels were all well within the expected range.

“Considering the political situation in the oil-supply regions, consumer prices should continue to be affected throughout the first half of the year, but they should stabilize toward the latter half,” Chung said.

The report on consumer prices came amid mounting fears of an inflation that may dampen the gathering growth momentum.

The government has been aggressively addressing these fears by relaxing import taxes on basic goods and unloading government stockpiles of agricultural products as prices started to rise.

The fair-trade watchdog, for its part, has cracked down on price-rigging in the corporate sector to prevent further increases in consumer prices.

Last month, the Bank of Korea, the nation’s central bank, joined the anti-inflation drive by raising its key interest rate by a quarter percentage point to 3 percent. That marked the fourth rate hike since July last year from a record low of 2 percent.

Experts expect that the BOK might raise the borrowing cost several more times this year.

The government currently forecasts the economy to grow 5 percent based on the assumption that inflation is stabilized at around 3 percent.