Korea’s economy grew by 6.2 percent in 2010 in the fastest expansion for eight years, the central bank said Wednesday after revising an earlier estimate of 6.1 percent.

The bank also raised gross domestic product growth for 2009 to 0.3 percent from its earlier projection of 0.2 percent. 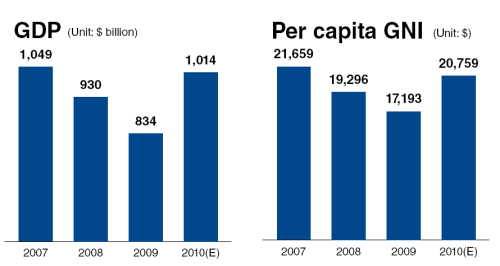 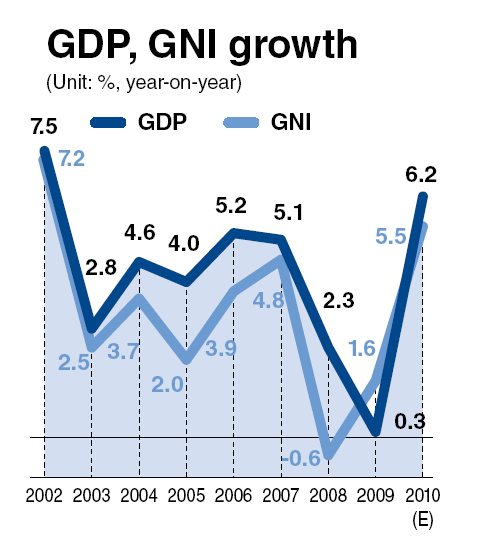 The country’s gross national income, reflecting the actual purchasing power of the population, rose 5.5 percent on-year in 2010, the fastest growth in eight years.

Its GNI per capita stood at $20,759 last year, up from $17,193 the previous year, the central bank added. The GNI per capita surpassed the $20,000 mark for the first time since 2007 as the economy grew and the local currency rose against the U.S. dollar. The Korean won appreciated 2.62 percent to the dollar last year.

“The growth of the Korean economy accelerated last year, helped by a sharp upturn in facilities investment, expanded exports and a pickup of growth in private consumption,” the Bank of Korea said in a statement.

The contribution of domestic demand to overall growth rose sharply in 2010, “pointing to self-sustaining recovery in the private sector,” said Kim Young-bae, director general of its economic statistics division.

“This year, the country’s GNI per capita is likely to reach a record high, given growth projections and the trend of the won’s gain to the greenback,” Kim said.

The data came as economic uncertainties linger while inflationary pressure is growing, leaving Korean policymakers facing difficulties in adjusting the pace and depth of policy normalization.

A recovery in advanced economies, including the United States, is expected to serve as an upside risk to economic growth, but the 9.0-magnitude earthquake and ensuing tsunami that devastated Japan on March 11 are viewed as adding to economic uncertainty.

The BOK has hiked the key rate in four steps to 3 percent since July last year from a record low of 2 percent.

Exports of goods, which account for about 50 percent of the local economy, grew 15.8 percent last year, up from an earlier estimate of 14.1 percent. Private spending, one of the main growth engines of the Korean economy, expanded 4.1 percent in 2010, the same pace as earlier expected.