The Korean government has decided to tighten its monitoring of radiation levels after minuscule amounts of a radioactive material from Japan’s crippled nuclear power plant was detected here for the first time Sunday.

“We will collect and test water and creature samples in 20 areas near Uleungdo, Dokdo, waters south of Jeju and other southern islands,” said Yun Choul-ho, president of the Korea Institute of Nuclear Safety.

“The test result is expected to come out in two weeks.”

The state-run nuclear regulatory agency has conducted this type of inspection twice a year in April and October.

According to the KINS, xenon-133 of 0.0878 becquerels per cubic meter was detected at a monitoring station in Gangwon Province on March 23.

The radiation levels were 0.00650 nanosieverts, an extremely small amount that poses no health risk, the agency explained.

Xenon-133, which was also detected after the 1986 Chernobyl accident, is considered less harmful to health compared to iodine-131 and cesium-137. It is short-lived with its radioactive potency halving every 5.27 days.

In Korea, the material had been found in October 2006. Because it usually does not exist naturally in the air, its detection was cited as evidence of nuclear tests in North Korea at the time. 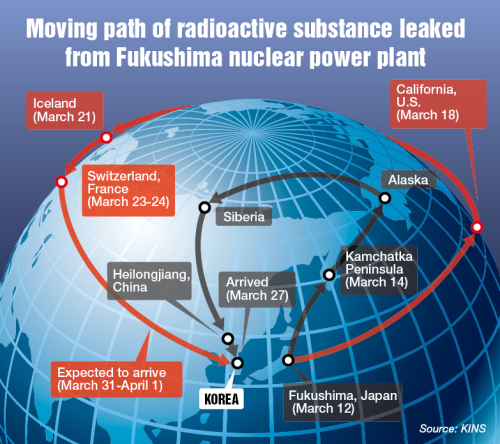 As the isotope released from the damaged Fukushima power plant was detected first in Korea, Yun added, the government’s monitoring on air materials, which has been conducted once a week, will be carried out every day at 12 stations nationwide.

“Considering that more than two weeks have passed since the Japanese accident, small amounts of radioactive materials can be detected again in Korea,” Yun said.

“The issue is not the detection itself, but the amount and density.”

Over the past few weeks there have been reports of such material in other countries such as China, the U.S. and Germany. However, the radiation levels were low, not presenting a health hazard.

The radioactive material will be dispersed and diluted in the air as it travels a long distance, said Lee Jae-ki, nuclear engineering professor of Hanyang University and member of the International Commission on Radiological Protection.

“Even when the wind direction shifts toward Korea, the radiation levels would be lower than the annually allowed limit of 0.1 millisievert,” he said in a recent report based on the case of Sweden, which is located some 1,000 kilometers away from the Chernobyl plant ― a similar distance between Korea and the Fukushima plant.

However, civic groups continued to raise doubts about the Korean government’s preparedness for Japan’s nuclear crisis.

They say that even small amounts of radioactive material can affect the health of infants and pregnant women, calling for the cancellation of all planned nuclear power plants.