The state-run Korea National Oil Corp. has bought a stake in an unconventional oil field in Texas from Anadarko Petroleum Corp., the Ministry of Knowledge Economy said Monday.

The firm now holds a 23.7 percent-stake in the shale oil field for which it paid $1.5 million and expects to complete the deal by the first half of the year, it said.

“The country’s first-ever acquisition of an unconventional oil field is meaningful in that we have succeeded in the early procurement of a prospective resource as well as an opportunity for technological enhancement (by working with Anadarko),” ministry officials said.

“Unconventional oil” is petroleum which is extracted using techniques other than the common drilling method. 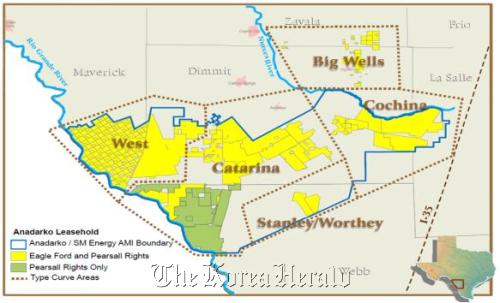 Nations around the world have been turning to the type due to the increasing global demand for oil and growing scarcity of conventional oil reserves.

The development of unconventional oil has become more popular over the years as more affordable high technologies became available.

Shale oil is a common type of unconventional oil produced from an oil shale. Synthetic oil and gas are produced from organic matters through hydrogenation or thermal dissolution.

The produce can be used immediately as fuel or upgraded to be qualified for refining. The refined products can be used for the same purposes as those derived from crude oil.

Altius is presumed to have 569 million barrels of crude in reserve at its four local oil fields and currently produces average 104,000 barrels a day, according to KNOC.

The ministry projected that the two deals would raise the country’s self-reliance rate of oil and gas by 0.5 percent point.

They are to elevate Korea’s oil reserve by 1.7 million barrels and its daily production by 65,000 barrels, the ministry said.

The resource-scarce country has been seeking more energy independence in a bid to meet rapidly rising domestic demand.

The country’s self-reliance rate of oil and gas jumped from 4.2 percent in 2007 to10.8 percent as of last year, according to the ministry.

The list of major deals includes KNOC taking over Dana Petroleum of U.K. in last September and Korea Resources Corp. acquiring lithium development rights for a Bolivian mine in November.