In the strikes, 112 Tomahawk cruise missiles were fired at more than 20 coastal targets to clear the way for air patrols to ground Libya’s air force.

While a U.S. defense official cautioned that it was too early to fully gauge the impact of the onslaught, the official said that given the precision targeting of the Navy’s cruise missiles, they felt that Libya’s air defenses suffered a good deal of damage.

The official spoke on grounds of anonymity because the mission was ongoing.

In announcing the mission during a visit to Brazil, President Barack Obama said he was reluctant to resort to force but was convinced it was necessary to save the lives of civilians. He reiterated that he would not send American ground troops to Libya.

“We cannot stand idly by when a tyrant tells his people there will be no mercy,” he said in Brasilia. 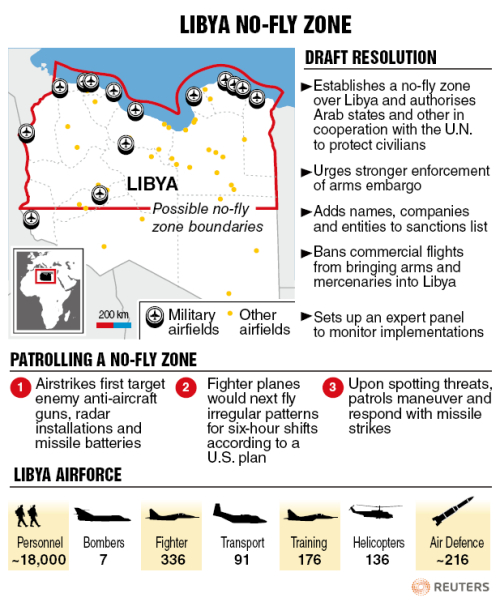 While U.S. defense officials said it was too early to gauge the impact of the onslaught, one senior official said that given the precision targeting of the Navy’s cruise missiles, they believe Libya’s air defenses suffered a good deal of damage.

It was clear the U.S. intended to limit its role in the Libya intervention, focusing first on disabling or otherwise silencing Libyan air defenses, and then leaving it to European and perhaps Arab countries to enforce a no-fly zone over the North African nation.

Navy Vice Adm. William E. Gortney, director of the Pentagon’s Joint Staff, told reporters the cruise missile assault was the “leading edge” of a coalition campaign dubbed Operation Odyssey Dawn. Its aim: prevent Moammar Gadhafi’s forces from inflicting more violence on civilians ― particularly in and around the rebel stronghold of Benghazi ― and degrading the Libyan military’s ability to contest a no-fly zone.
“This is not an outcome the U.S. or any of our partners sought,” Obama said from Brazil, where he is starting a five-day visit to Latin America. “Our consensus was strong, and our resolve is clear. The people of Libya must be protected, and in the absence of an immediate end to the violence against civilians our coalition is prepared to act, and to act with urgency.”

SA-5 surface-to-air missiles, which are considered a moderate threat to some allied aircraft. Libya’s overall air defenses are based on older Soviet technology but Gortney called them capable and a potential threat to allied aircraft.

Cruise missiles are the weapon of first choice in such campaigns; they do not put pilots at risk, and they use navigational technologies that provide good precision.

The first Tomahawk cruise missiles struck at 3 p.m. EDT, Gortney said, after a one-hour flight from the U.S. and British vessels on station in the Mediterranean.

The U.S. has at least 11 naval vessels in the Mediterranean, including three submarines, two destroyers, two amphibious warfare ships and the USS Mount Whitney, a command-and-control vessel that is the flagship of the Navy’s 6th Fleet. Also in the area are Navy P-3 and EP-3 surveillance aircraft, officials said.

Gortney initially had said that it could take as long as 12 hours to assess the effectiveness of Saturday’s strikes. Then a high-altitude Global Hawk unmanned surveillance plane would overfly the target areas to get a more precise view, the admiral said. He would not say how long the attacks on Libyan air defenses would last, but he stressed that Saturday’s assault with cruise missiles was the first phase of a multi-stage mission.

Explosions continued to rock the coastal cities, including Tripoli.