Military helicopters carrying giant buckets were preparing to drop water on the stricken plant, which has been hit by four explosions and two fires since last Friday's earthquake and tsunami knocked out cooling systems.

But media reports quoting defence ministry officials said the attempt was postponed because of high radiation levels over the Fukushima No. 1 plant, 250 kilometers (155 miles) northeast of Tokyo.

Scared Tokyo residents filled outbound trains and rushed to shops to stock up on face masks and emergency supplies, amid fears of radiation headed their way. Some foreign residents have also pulled out.
The radiation level in the mega-city was normal Wednesday, officials said.

Levels had risen Tuesday but not to a degree hazardous to health.

Chief government spokesman Yukio Edano made an apparent attempt to ease fears in the face of mounting overseas concern.

He said radiation poses no immediate health threat outside a zone within 20 km (12 miles) of the plant which has already been evacuated.

"I have been informed that the figures monitored today (outside the zone) were not anything that would harm human health immediately," Edano told a briefing.

The day began with a pre-dawn blaze at the plant's number-four reactor.

This apparently died out of its own accord, but in mid-morning a cloud of smoke or steam was seen rising from the number three reactor.

Radiation levels then rose sharply at the plant -- prompting a brief evacuation of workers -- but fell soon afterwards. 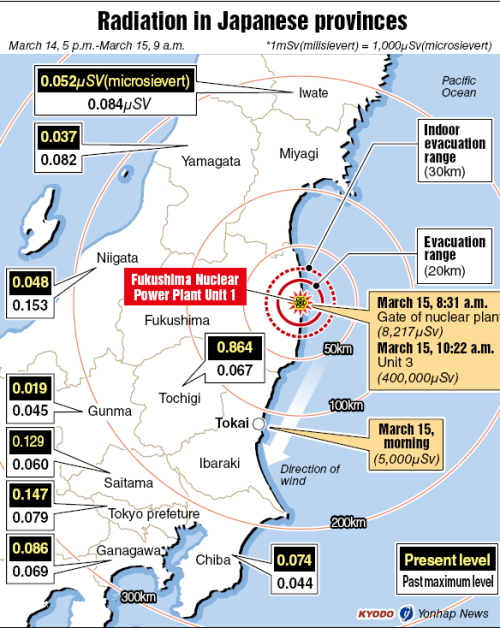 Edano said the most likely explanation for the sudden rise was an emission of radioactive steam from the number three reactor's containment vessel, although he stressed nothing had been confirmed.

There was no need at present to expand the evacuation zone around the plant, he said. At 4:00pm (0700 GMT) the radiation level was stable around 1.5 millisieverts near the front gate, the spokesman said.

Edano said workers were preparing another attempt to pump water around the overheating reactor fuel rods to cool them down.

The government had earlier reported apparent damage to the suppression pool surrounding the base of the containment vessel of the number-two reactor.

It was unclear how much damage, if any, there had been to the steel and concrete containment vessels around the reactors.

But there are also major fears about pools holding spent fuel rods at the plant, which also need water to keep them cool. Unlike the reactors, they have no containment vessels.

If water evaporates, the spent rods will be exposed to the air and radioactive material will be released into the atmosphere.

One of these pools "is the major concern" in the crisis, presenting the risk of radioactivity being released directly into the air, France's Nuclear Safety Authority said.

It said the evaporation of water in the pool was continuing.

Eight experts from the US Nuclear Regulatory Commission were to arrive Wednesday to advise on managing the situation, the foreign ministry said. It was not immediately known if they would go to Fukushima.

In an indication of the damage so far, the nuclear safety agency said 70 percent of the fuel rods at the number-one reactor and 33 percent at the number-two reactor are believed damaged.

The French nuclear authority has said the disaster equated to a six on the seven-point international scale for nuclear accidents, ranking the crisis second only in gravity to Chernobyl.