Consumer prices in February rose above the government’s target for the second month in a row amid signs of slower growth, bolstering concerns of stagflation.

The Consumer Price Index advanced 4.5 percent from a year ago to a 27-month high, following January’s 4.1 percent gain from last year. The Bank of Korea targets inflation rates to remain at 3 percent level for this year and next. 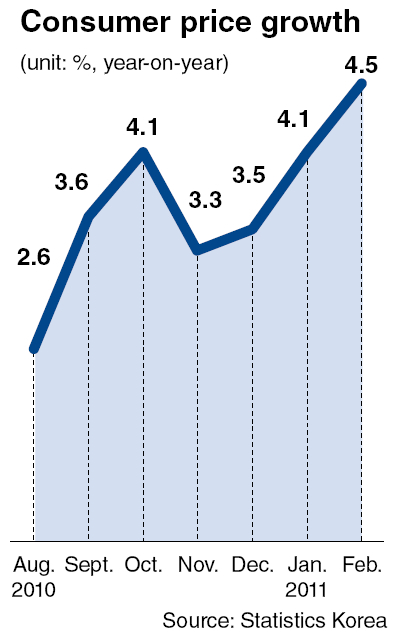 Economists warn that the continued inflationary pressure could coincide with a slowdown in growth and result in stagnation.

“I see high possibility of these price increases turning into a short-term stagflation, on the condition that the oil price surge continues for at least a quarter or two,” Lee Sang-jae, an economist at Hyundai Securities said.

Stagflation indicates an economy in high inflation amid low economic growth, which poses a dilemma for the central bank in their monetary policies.

“Should oil continue to surge at the current rate, which I think it will, Korea is likely to experience one quarter or more of stagflation,” he said.

The Finance Ministry attributed the extended increase on the overlap of three outbreaks ― foot-and-mouth disease, a prolonged cold spell and soaring oil.

“It is tough to cap the price surge. We’re trying to accelerate in carrying out inflation measures but at the same time, we’re aiming for structural changes in the supply chain so that may take some time,” Vice Finance Minister Yim Jong-ryong told reporters Wednesday.

The Finance Ministry, the Ministry of Knowledge Economy and other relevant government agencies held an emergency meeting earlier in the day to reassess the impact of higher prices.

Korea’s fight against stubbornly high inflation is part of a regional war tapped by central bankers in Asia where interest rates have been rising to curb the inflation.

The Bank of Korea is under pressure to raise the benchmark interest rate, which remained unchanged this month at 2.75 percent after a quarter percentage raise in January.

Brent crude futures for April delivery, indicating oil price movements, soared to $116.03 a barrel Wednesday, hitting a nearly 30-month high as tension in Libya ratcheted up. Libya, one of the world’s top 10 oil exporters, threatens to descend into a civil war amid a public outcry for leader Moammar Gaddafi to quit. Seoul stocks dipped to their lowest this year due to Middle East concerns on Monday, closing at 1928.24.

HSBC warns that February inflation data should be seen as especially troublesome.

“The jump in February’s CPI has in fact happened before the rise in crude costs has fully filtered through. Indeed, the January core CPI rose almost at a record pace, fuelled again by a rise in private service charges especially eating-out and housing rent,” the bank said shortly after the government statistics were released.

Signs of slower growth surfaced in the fourth quarter of last year when the country’s net terms of trade index declined from a year earlier. An index measuring net of export and import came in at 84.1 in the October-December period, marking the worst contraction since the second quarter of 2010.

Think tanks are expected to revise up their inflation forecast for this year.

“Hyundai predicts a 3.9 percent CPI for this year. This is already the highest among major think tanks, but we’re considering a raise given two consecutive month of more-than-expected increase in the figure,” Lee said.

Investment banking giant Goldman Sachs raised its inflation forecast for Korea from 3.3 percent to 3.6 percent earlier this week, citing uncertainties over the political unrest in the Middle East.

“We raise our inflation forecasts to 3.6 percent for 2011 and to 3.3 percent for 2012, mostly on the recent surge in oil prices amid the tension in the Middle East,” said Kwon Goo-hoon, an economist at Goldman Sachs, in a report released Monday.