With immigration to South Korea increasingly rapidly in recent years, politicians and talking heads have stressed the need for the country to embrace ethnic and cultural diversity.

President Lee Myung-bak, in a radio address last July, heralded that the country was “truly becoming a multicultural society” and called for Koreans to welcome outside cultures and people.

But with the leaders of Germany, France and the U.K. all recently declaring multiculturalism a failure, Korea’s chosen immigration policy is slipping out of vogue. France has long favored an assimilation approach, but the U.K. and Germany have tended toward multiculturalism, where different ethnic groups maintain a distinct culture and identity.

The Ministry of Gender Equality and Family, which is responsible for multicultural affairs, said that while research had been done on the policies of North America and Europe, there were no plans to adopt the immigration or integration policies of any specific country, owing to “Korea’s distinct characteristics.”

But, in line with the official rhetoric, The First Basic Plan for Immigration Policy, 2008-2012 from the Ministry of Justice is flush with references to multiculturalism.

One of the latest, and most contentious, policy developments in this vein has been the move to establish the country’s first public high school exclusively for multi-ethnic children, due to open in Seoul in 2012.

According to the Division of Education and Welfare Policy of the Ministry of Education, Science and Technology, the school, pending public and parliamentary hearings, will primarily cater for older children born outside of the country who have been brought to Korea with limited knowledge of the language and culture.

The school was agreed upon in conjunction with The Presidential Commission on Social Cohesion. According to the ministry, it will help children of multicultural families adapt to Korean society and further their future job prospects.

But Park Kyung-tae, professor of sociology at Sungkonghoe University, sees the school as an example of misguided policy.

“I am opposed to the school, because it will further segregate the multiracial children,” he said.

Professor Han Geon-soo of Kangwon National University echoes these concerns. While he sees the rationale of such schools for migrant workers who are likely to return to their home countries, he feels that for families who settle in Korea, separation is not the answer.

“I think basically those children’s education should be done with other Korean children. Right now it may work, but I worry about it if we open separate schools it means, for the future, Korea may be divided,” he said.

Reaction to the school from the Gender Ministry has also been negative. Despite the Education Ministry education and welfare division’s insistence that the decision to open the school was taken with the endorsement of the Gender Equality Ministry, the latter denied this and said it did not support the principle of separating multi-ethnic students from the general school population. 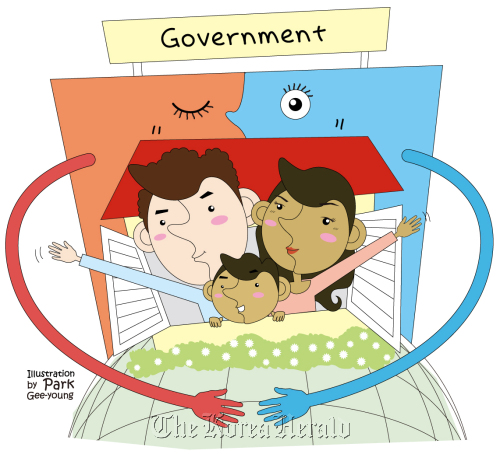 In a statement, the Gender Equality Ministry said: “The establishment of a separate school, class, and after school activities for children with multicultural backgrounds is not viewed as an appropriate measure for the children of multicultural families.”

However, calling the school a “kind of preliminary process,” the Education Ministry’s education and welfare policy division stressed that multi-ethnic children were free to join general schools if their parents wished. It also said that children who did opt for the specialized school could transfer to a general school upon reaching an adequate level of adaptability.

The question of what direction government policy should take is not confined to schooling. At the start of the year, a government policy to cover child care costs for families with one parent of a foreign nationality came into effect.

It caused little controversy in the media or the National Assembly. The political mood is for increased welfare for the general population, rather than for reduced benefits for minorities. Many Koreans argue that multicultural families are generally disadvantaged, and need extra support. But online, this opinion has its detractors.

Their complaints were directed at one aspect of the new child care policy: it covers costs regardless of income for “multicultural families” ― meaning those that have one parent who is of a different nationality ― but families in which both parents are Korean are means tested.

For the latter, child care costs are only covered if family income is below a certain level ― 4.5 million for a single-earner household and 6 million won for a double-earner home. According to the Gender Ministry, 70 percent of childbearing households in Korea are eligible for free child care.

But, even with the majority of Korean families covered, is there a danger that the selective policy could breed resentment?

Park, who specializes in multiculturalism, believes the measure is unfair.

“While he (President Lee Myung-bak) and GNP do not support welfare for all but welfare for those in need, many Koreans in need do not have proper access to welfare,” he said.

“If the government helps only multicultural families, it can be seen as a kind of reverse discrimination. The government should not divide and rule.”

The Gender Ministry declined to comment on the rationale behind giving different benefits based on ethnicity. It also refused to comment on whether it was concerned the policy could be lead to division and resentment among the public.

The ministry did, however, provide a statement saying that with the rise in international marriages it has enacted Korean language education programs, counseling and job placement services in order to support the social adjustment of multi-cultural families with a clear purpose to contribute to social integration in society.

It also added that there are currently no plans for further financial supports for multicultural families.

Park dismisses the calls that multiculturalism has failed as “right wing propaganda.” But he doesn’t believe there is a one-size-fits-all solution.