Korea’s producer prices rose to a 26-month high in January on stoking agricultural and farm products, posing the prospect of further food price hikes for the consumers.

The producer price index, indicating price movements at retailers, increased 6.2 percent in January from a year ago, recording a steeper pace from 5.3 percent posted in December, the Bank of Korea said Friday. The January rate is the fastest increase since a 7.8 percent rise in November 2008.

The central bank froze the benchmark interest rate at 2.75 percent hours after the index was released, adding to the inflationary concern the country is facing under soaring commodities and ample foreign capital inflow. 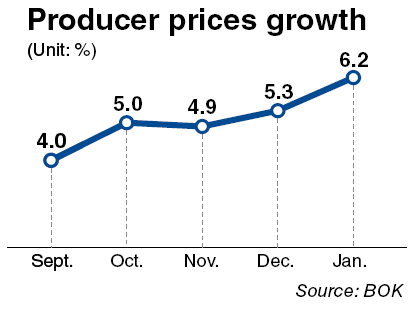 The shortage in farm goods is caused by a prolonged cold spell and snow, on top of the foot-and-mouth disease breakout since November.

Price of live stock goods increased 19.6 percent during the past month after more than 3.16 million infected pigs and cows were killed since November.

Consumer expectations for inflation over the next year jumped to an 18-month high in the same month.

The economy has been heating up fast on resilient exports. The country’s December exports grew 23.1 percent to a record $44.34 billion in December from a year before, producing a trade surplus of $3.74 billion with a $40.60 billion imports.

Consumer prices have been soaring despite Seoul’s anti-inflation measures announced in steps since Jan. 13.

Prices of key crops have risen to the highest level in January. Peas rose 65 percent from last January to 11,602 won per kilogram while red beans jumped 75 percent to 15,712 won per kilogram, Korea Agro-Fisheries Trade Corp. said.

The Fair Trade Commission is conducting an extensive investigation into about 40 large firms and its suppliers to root out business malpractices blamed for unfair price settings.

Seoul is also nudging to cut prices in oil refining and the telecommunications industry. The Finance Minister Yoon Jeung-hyun on Thursday called for reform of oligopolistic industries to increase competition and make more rooms for price cuts.

“Despite the improved productivity in the telecommunications industry, there has been an insufficient decrease in service charges.” Yoon said.